Real Money Stock of the Day twice in the same week. Walmart (WMT) may be changing the game here, but that is commonplace for the company that changed bricks-and-mortar retail.

Our focus on Thursday shifts from NextDay free delivery to a solid earnings report.

Walmart breezed past earnings per share expectations by $0.11. The company reported $1.13 per share on revenue of $123.9 billion. Although revenue came up a billion shy of estimates, currency fluctuations drove the miss.

Excluding currency, Walmart would have reported $125.8 billion in constant currency revenue, so I view this as essentially in-line. While that isn't wowing, the bottom-line strength is impressive. The company also had another $0.20 unrealized gain thanks to an equity investment in JD.com JD, a favorite Chinese name of mine.

During the quarter, $2.1 billion in stock was repurchased equaling 22 million shares and $1.5 billion in dividends were distributed to shareholders. The company still has $9.2 billion remaining on its buyback authorization.

Another factor that weighed on domestic sales was reduced tobacco sales. I do believe this trend will continue, but the good news is there is a product waiting in the wings that could dwarf tobacco sales: CBD. Expect non-THC CBD to replace tobacco sales starting potentially as early as next year. 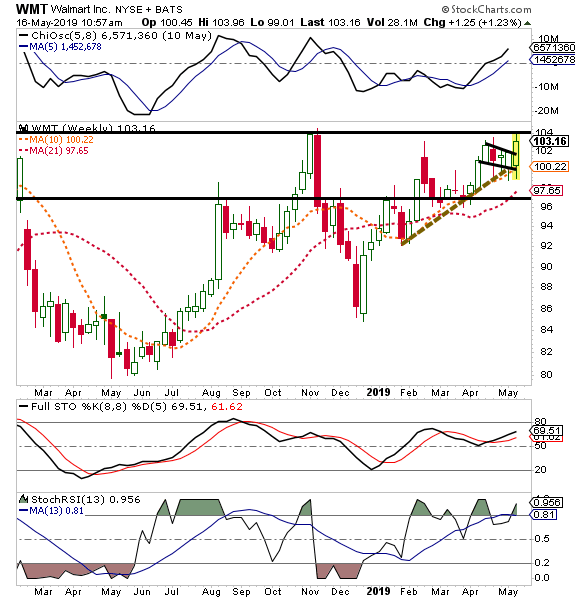 Based on Thursday morning's report, I believe the reaction we've seen in the stock, currently up 3%, feels correct. Initially, I thought a move over $102 would trigger a breakout, but in reviewing the weekly chart I need to readjust that number to $104. In short, my initial take was wrong.

If WMT fails to close over $104 this week or next, then I would anticipate the shares getting stuck in a trading range of $97 to $104 for the next few months.

There's nothing in this report that makes me bearish on Walmart. The retail market has enough room for Amazon (AMZN) , Walmart, and even Target (TGT) , in my view. Until the overall economy truly sours I'd be eyeing these names for long side trades.

Get an email alert each time I write an article for Real Money. Click the "+Follow" next to my byline to this article.
TAGS: Earnings | Investing | Stocks | Trading | Retail | Consumer Staples | China | Stock of the Day