The bulls continued to benefit from traders being underinvested and fear of missing out setting in during Thursday's regular session. The Invesco QQQ Trust (QQQ) gained nearly 1.5% on the session, giving the index a weekly gain of more than 5.25%. On the momentum side of things, the ARK Innovation ETF (ARKK) is now up 11% on the week after gaining 1.75% yesterday.

From a trading perspective, I want to remain bullish as long as price remains above the 21-day exponential moving average (EMA). But looking out over a longer time horizon, I don't expect V-shaped bounces to return if the Fed is aggressively hiking rates and isn't on the investors' side. And while I continue to hear contrarian investors suggest that investors are too bearish and that the economy isn't as bad as some will have you believe, I don't see the need to add risk to one's portfolio in a significant way with inflation running more than 9% and a Fed that likely wants rates significantly higher than where they are today.

On the earnings front, Thursday's after-hours session was ugly. We got quarterly results from Snap Inc. (SNAP) , Intuitive Surgical (ISRG) , Seagate Technology (STX) and Boston Beer Co. (SAM) , and every report was a stinker. Suffice it to say I was dead wrong in my thinking, expressed on Thursday, that some out-of-the-money call options on SNAP might be a good gamble. The only unanswered question is whether investors buy into this morning's bearish openings or if they punch out and move to the sidelines.

Setting Thursday's earnings bombshells to the side, the real test for QQQ will come next week when we get reports from folks such as Microsoft (MSFT) , Alphabet (GOOGL) , Visa (V) , Shopify (SHOP) , Meta Platforms (META) , Apple (AAPL) and Amazon (AMZN) . While I don't expect investors to make any meaningful moves ahead of these reports, I continue to believe that short-term traders should error to the long side, at least on QQQ, until price breaks our short-term EMA. 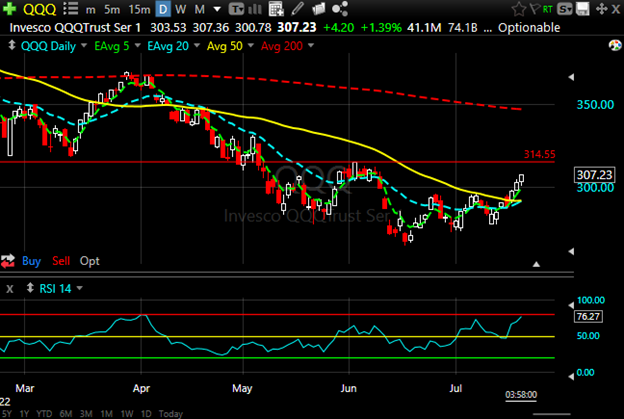 We don't need to break things down to the penny, so for now, let's say as long as the QQQ is holding above the 5-day EMA, or $298 to $300, there's no reason to begin betting against the Nasdaq as the short-term trend is clearly bullish.

Get an email alert each time I write an article for Real Money. Click the "+Follow" next to my byline to this article.
TAGS: Earnings | ETFs | Index Funds | Investing | Options | Stocks | Technical Analysis | Technology | Real Money