There are few things in life we can count on. But when it comes to markets, if you get a good rally in the tech stocks, especially the mega-cap names, folks will change their view to a sunnier one. And that is what happened on Wednesday.

Sure, some of you will say, "But it was Fed Chair Jerome Powell that changed investors' views."

Let me ask you this: If Chair Powell's speech did not push stocks upward, specifically tech stocks, do you think folks would have been as excited as they were? Of course not.

Chair Powell gave them the reason they needed to go back to their beloved tech stocks. But that's why I thought we needed them to rally again, to remove that gloom that had been cast over the market this week.

Now we have the Wall Street Journal learning a small lesson from the summer. Recall in early August the paper proclaimed that Nasdaq was in a new bull market when it rallied 20% off the lows. That was just prior to it rolling back over. Now it has proclaimed the Dow is no longer in a bear market. I don't know what it needs to become a new bull market, but clearly the Journal wants to take baby steps this time.

So they forced folks to buy tech and whether it was short covering or chasing, it did what it was supposed to do and lifted the gloom.

Breadth remains in gear, but notice that the S&P is now a mere 20 points from that early September peak around 4,100 but the cumulative advance/decline line is about 5,000 issues below that same level. That's going to be one tall order for breadth to catch up. But the McClellan Summation Index continues to move upward.

The number of stocks making new highs did not increase, but that's what happens when folks are forced into the down-and-out names. 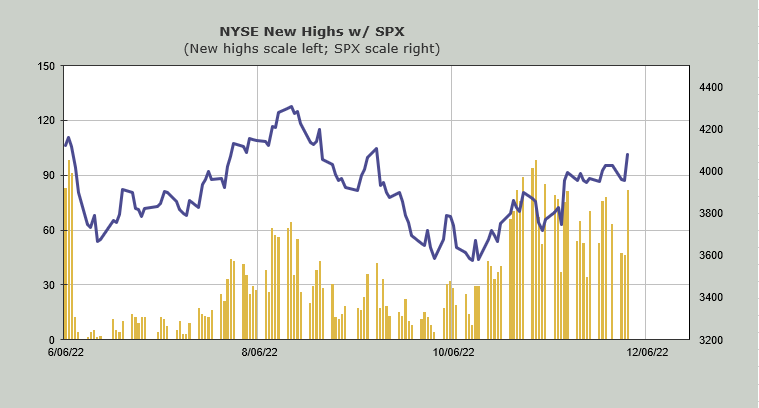 I believe the window is still open for a few more days of rallying, enough to really change sentiment if they want to -- but take a look at the numbers we're dropping off the 10-day moving average (the short-term Oscillator) and the 30-day moving average (intermediate-term) of the advance/decline line in the coming days. You can see the big red numbers to be dropped Thursday and Friday, but starting Monday those numbers are not very red at all. And that's what makes us back to overbought early next week. 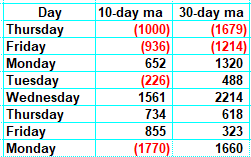 I have one more reason I would like to see the rally last a few more days. I have noted anecdotal sentiment above, but the Daily Sentiment Indicator (DSI) for the Volatility Index is back down to 16. If we rally another day or two, it will head right into the yellow zone, under 15 and maybe even push to single digits. And that is why I expect to see volatility rise again in early December.

Get an email alert each time I write an article for Real Money. Click the "+Follow" next to my byline to this article.
TAGS: Investing | Stocks | Technical Analysis | Top Stocks |