The laggards rallied. That would include the banks -- the Bank Index was barely green on the day, but it did outperform. It would also include the small caps -- yes, those rationalized away stocks that last week everyone said didn't matter anymore -- outperformed. And, it would include the Transports: You know, the group that everyone claimed was not a good reading on the economy anymore because the Semis -- semiconductors -- were where it is at.

The Bank Index has not been able to get out of its own way since it had that terrific day in mid-December. It's been a whole lot of nothing in the last month or so. But no uptrend lines have broken yet.

The iShares Russell 2000 Index (IWM) , an exchange-traded fund for small caps rallied well, but basically stopped at the old high. If I wanted to be negative, I might even draw in this uptrend line that was broken and the rally on Tuesday was a throwback to the underside of the line.

The Transports on the other hand have done really well ever since they were declared meaningless by the television pundits. Yet, here they are back at their old high. As I said earlier this week, I like this group, but I don't expect an easy ride through these old highs. I expect this resistance to be a short-term problem, especially since FedEx (FDX) filled that earnings gap, as if it came out of a textbook.

Since the laggards finally joined the party, breadth put in a good showing. But despite the better breadth, these last two days it hasn't budged the McClellan Summation Index. It remains flat. Remember this indicator tells us what the majority of stocks are doing.

On the sentiment front, I would point out that the Daily Sentiment Indicator (DSI) once again worked well. It tagged 90 for both Nasdaq and the S&P 500 on Monday and Tuesday saw a red day in both. What is curious though is that the Volatility Index (VIX.X) has barely budged for days, despite the intraday gyrations. The DSI for the VIX remains in the single digits at nine. In fact, it has been so low so often in the last week that the five-day moving average is now nine. Yet the VIX has not made a lower low since Thanksgiving. My guess is, just based on this, we should see a pick up in volatility in the next week.

Sticking with sentiment, the 21-day moving average for the exchange-traded fund put/call ratio joins the other moving averages of the various put/call ratios, as it has now gone below the July reading and is fast approaching the January 2018 reading, which was below 100%. 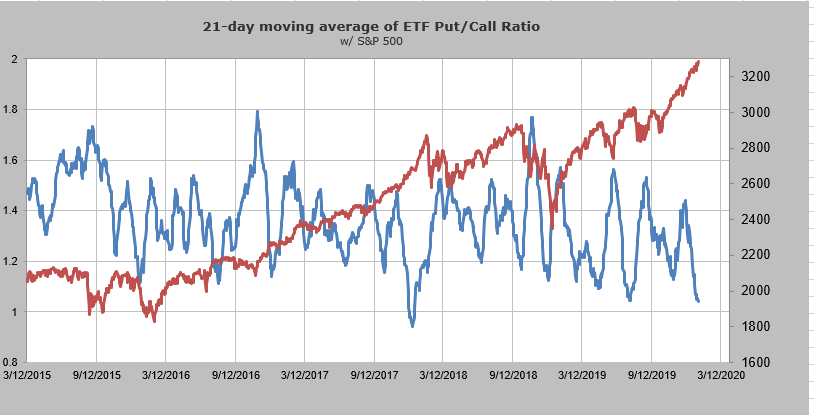 I want to end with a bit of a personal note. As many of you know, I put a pencil to the paper each night to hand-post my stock charts. In this day and age, it is a lost art, posting stock charts by hand. I have decided to auction off, for charity, a hand drawn chart of Tesla (TSLA) . Should you like to bid on it, the link is here. It is for a good cause.

If you would like to read the entire Twitter thread on where the money is going and what the chart looks like, you can find that here. Thanks for your consideration!

Get an email alert each time I write an article for Real Money. Click the "+Follow" next to my byline to this article.
TAGS: Investing | Small Cap | Stocks | VIX | Banking | Financial Services | Transportation |