By BRUCE KAMICH Mar 24, 2022 | 08:41 AM EDT
Stocks quotes in this article: PVH
PVH Corp. ( PVH) is one of the world's largest fashion companies with iconic brands such as Calvin Klein, Tommy Hilfiger and Van Heusen. Almost a year ago, on March 29, 2021, I reviewed the charts of PVH and wrote, "PVH might continue trading sideways for a few more weeks if the broader market is weak. Traders should be ready to buy a rally to $104 risking to $90. Add to longs above $110. Our targets are $124 and then the $153 area." PVH reached its $124 price target in November and has declined sharply since then.
Let's check the charts again.
In this updated daily bar chart of PVH, below, we can see that traders bought dips to the 200-day moving average line in July and October but sold rallies to the 200-day line in January and February; this action clearly defines the shift from bull to bear. PVH is trading below the declining 50-day moving average line and below the declining 200-day line. The On-Balance-Volume (OBV) line has been in a decline for the past 12 months, telling us that sellers of PVH have been more aggressive for several months. The Moving Average Convergence Divergence (MACD) oscillator has been bearish since early December but recently crossed to the upside for a cover shorts buy signal.

In this weekly Japanese candlestick chart of PVH, below, we can see the topping pattern PVH has made. A neckline across $90 has been broken. Prices might rebound back to the underside of the neckline but that is likely to be a selling opportunity. The slope of the 40-week moving average line is negative (bearish). The MACD oscillator has been weakening since early 2021 and is in a sell mode below the zero line.

In this daily Point and Figure chart of PVH, below, we can see a nearby downside price target of $76. 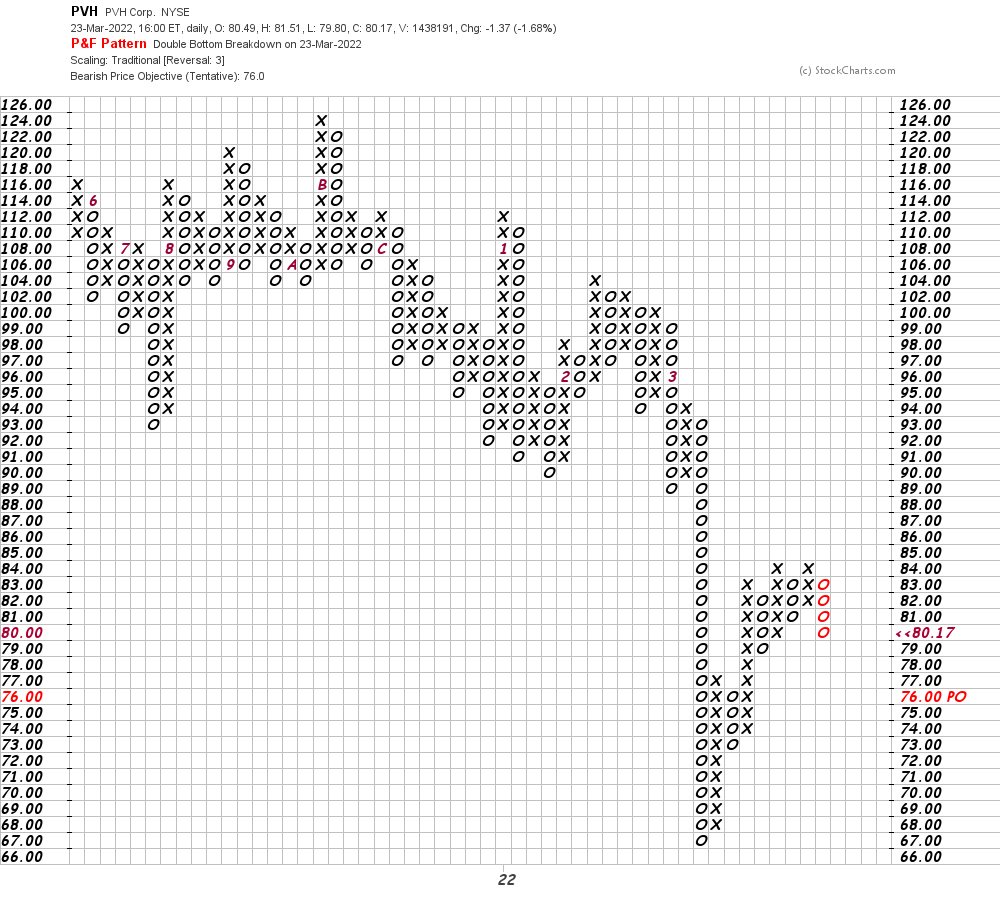 In this weekly Point and Figure chart of PVH, below, we used a five-box reversal filter. Here the software projects the $36 area as a tentative price objective.

Bottom line strategy: PVH has made an important top formation and has turned lower. Prices could bounce a bit and may improve with the broad market, but further declines look possible in the weeks and months ahead. I would avoid the long side of PVH.
Get an email alert each time I write an article for Real Money. Click the "+Follow" next to my byline to this article.
TAGS: Investing | Stocks | Technical Analysis | Apparel | Consumer | Retail | Real Money