Two days ago, so few thought Santa was coming to town.

Tuesday, they tentatively hoped he might make an appearance. But after Wednesday, folks are singing Jingle Bells and have done an about face from just a few short days ago.

I know, this because the CBOE's put/call ratio fell to .82. Keep in mind that .82 is still relatively high and by no means showing giddiness, but it is the lowest reading since Nov. 22, which is how we know the sentiment shift is on.

We also know the sentiment shift is on, because the International Securities Exchange Call/Put Ratio for equities only is back over 2.0, a level not seen since the back to back readings of Dec. 8 and 9. I would, however, note that the 10-day moving average of the CBOE's put/call ratio has finally rolled over properly and hovers around .94, down from .98 last week. I expect we will see this fall further in the days ahead. 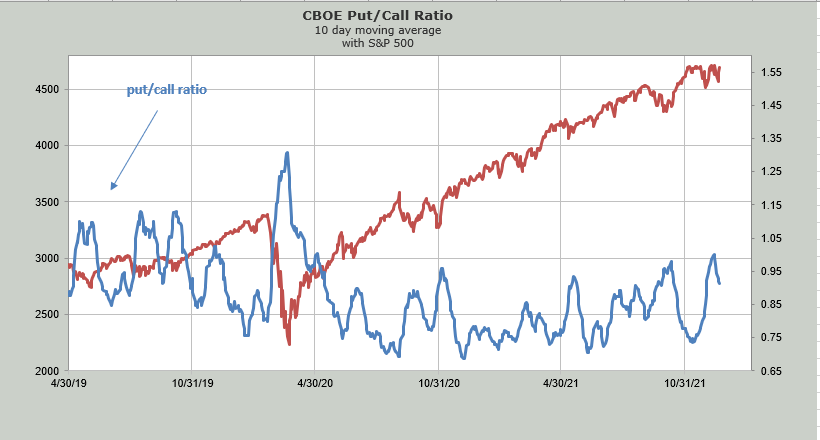 On a more intermediate-term basis, the Investors Intelligence bulls are back at 42%, which I consider a low reading. Keep in mind it reflects action from the prior week, so this week is not included. They take next week off so the next release will be the first week of January. If we continue to rally next week (which is my view) these bulls could see quite a jump just as we're heading to a short-term overbought reading again.

It's still a bit early to tell but as of now I would expect us to be back to a short-term overbought reading in early January. I realize that's hard to imagine right now considering the Oscillators have barely moved and aren't even near the zero-line yet, but the math says by early next week they should be on the move upward.

I would show you the McClellan Summation Index, because it finally ticked up, but you would need to get one heckuva magnifying glass to see it. Just know that it now requires a net differential of negative 1,100 advancers minus decliners on the New York Stock Exchange to halt the rise.

Then there is the Russell 2000 (IWM) chart, which we looked at this week. That perfect downtrend line with all those touches on the line was finally breached for the first time in seven weeks. My theory on downtrend lines is that crossing one that has been in place as long as this one has and one that has so many touches shows a change in the pattern, and that is what we look for.

You can see there is still resistance all the way up to $225 and then that gap overhead that looms from late November, but at least we are no longer in the downtrend that has been in place for so long.

Wishing all who celebrate a very Merry Christmas!