By TIMOTHY COLLINS Dec 23, 2019 | 01:13 PM EST
Stocks quotes in this article: TM, TSLA, GM, F, HMC
Emotion is the greatest enemy of a trader.
There aren't many stocks that draw the emotional responses we see from Tesla ( TSLA) . People either love it or hate it, but I don't often see a position in between. As I mentioned in November, there isn't much I love in terms of the fundamental aspect of the company. With its $73 billion market cap, only Toyota ( TM) carries a higher valuation. Honda  ( HMC) and General Motors  ( GM) sit a bit above $50 billion and Ford ( F) trails the pack at $37 billion.
When some investors see Telsa having the worst return on assets, return on equity, return on investments, operating margins, profit margins, price to sales, price to book, price to cash, and price to free-cash-flow (yes, all of them), you might understand some of the frustrations fundamental shorts have when they watch the stock continue to move higher.
Add in an arrogant and outspoken CEO who is as much P.T. Barnum as he is genius, and the situation only amplifies. Admittedly, there's something to be said for a CEO who's willing to lay it all on the line for company publicity.
Musk certainly toes the line often with the occasion --  OK, the blatant, crossing of it -- but it's rare when we go more than a week without discussing the stock, the product, or the CEO. With the stock trading around $420, expect an avalanche of "funding secured" jokes, parodies, and tweets, but it may do something more. It might just take some heat off Elon Musk. After all, it is his continual toe-tapping the line as well as crossing it that gets attention from some agencies and people you don't want looking your way.
The recent move has been dubbed a short-squeeze, despite the short count falling by 18.2 million shares this year. However, as of Nov. 29, according to the Nasdaq, some 28.65 million shares remain short. That's approximately 20% of the current float. A continued squeeze is still a very real possibility.
Bulls may try to lean on the $1.4 billion five-year loan from Chinese banks for Tesla's Shanghai facility as an additional catalyst. The plant, which broke ground at the start of 2019, aims to produce 1,000 Model 3's without concern for tariffs, as the company seeks to expand internationally. It's worth noting that $500 million of the loan proceeds are being used to rollover a debt coming due on March 4, 2020.
On Nov. 13, I used Tesla's chart as an example of how charts can help with entries, exits, or to simply avoid going against a trend. That chart showed three spots of danger for shorts with a conclusion Tesla still wasn't set up as an attractive short. The price at that time? $351.
Shares are certainly extended now after rising roughly 25% during the month of December. The move high has come with strong volume as momentum players pile in and shorts struggle to remain afloat. Normally, I'd key on a bearish crossover in the Full Stochastics for a possible short entry, but that trigger has failed to work well over the past four months. 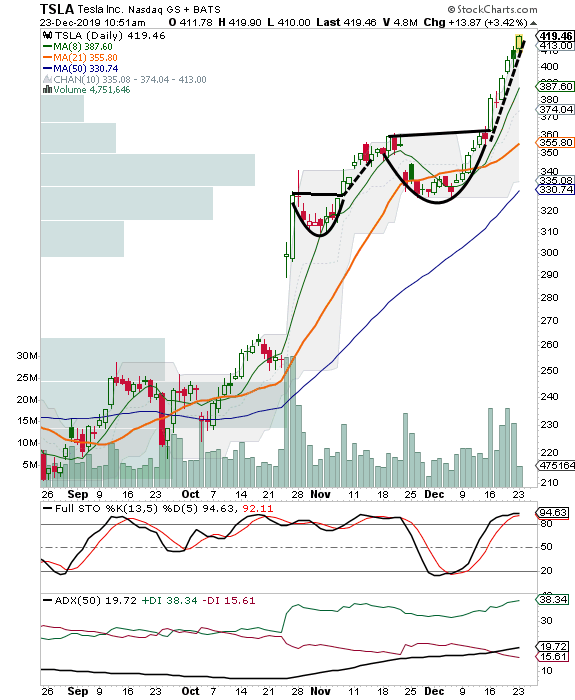 As we roll into the holiday, I don't see a need to play this name. If the steep trendline fails to hold around $410, we could see a trip back to $380 in a hurry, but until that trendline breaks, I don't expect bulls to back off in the least. If you own it, continue to ride the stock with a trailing stop around the eight-day Simple Moving Average. If you're short, then consider a holiday wish that bulls simply decide they've enjoyed enough of the spirit of making money.
Get an email alert each time I write an article for Real Money. Click the "+Follow" next to my byline to this article.
TAGS: Luxury Cars | Investing | Stocks | Automobile Components | Automotive | Stock of the Day

There is a high level of risk that the market rolls over again, but that risk will be minimized if we have some better chart development in the days ahead.