The market took a stronger-than-expected monthly jobs report from the Bureau of Labor Statistics (BLS) in stride last Friday. Both the S&P 500 and Nasdaq posted minor losses for the day to close out the trading week. However, my concern that the Federal Reserve is about to make another grave policy mistake is growing by the week.

Taking a step back, let's recall the central bank's insistence (with a major assist from the Treasury Department) that inflation was "temporary" and "transitory" throughout most of 2021 has led us to our current bind -- specifically, the highest inflation levels since the early 1980s and a consumer who has lost more than 5% of their buying power since the start of 2021 to the scourge of rising prices.

The response from Fed Chairman Jerome Powell and the Fed governors has been to embark on the most aggressive monetary tightening efforts in decades. The resultant spike in interest rates already has curtailed activity in the housing sector significantly and slowed other economic growth engines. Unfortunately, while inflation levels have come down a tad in recent months, they remain stubbornly high, which makes achieving a "soft landing" while simultaneously engineering a huge drop in inflation readings more and more of a pipe dream.

The Fed seems bound and determined to keep moving rates upward until job growth grinds to a halt. Unfortunately, I believe the BLS monthly job readings are significantly overestimating the current strength of the U.S. job market, which increases the chances the central bank will keep raising rates for longer than need be. The result will be dire consequences for the economy, the markets and employment. 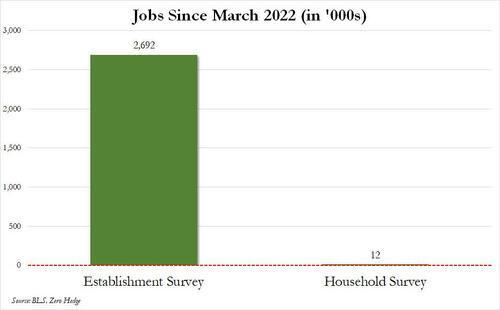 Since March there has emerged a growing gulf between the number of employed individuals cited in the BLS Household Survey and BLS Establishment Survey.  The difference has risen to nearly 2.7 million jobs over the past eight months, with the Household Survey basically pointing to flat job growth over that time.

In November, the Household Survey showed a loss of 138,000 jobs in the month.  This is because the BLS Establishment report does not adequately capture individuals working multiple jobs, which is currently at all-time high as many Americans struggle to meet ends meet. The BLS Establishment survey response rate was also much lower than is typical for November, which means the government agency had to make additional "adjustments" to its models to come up with the November jobs numbers.

In addition, if my small business goes into bankruptcy and I am forced to take a job again in corporate America, the BLS will note that as a job gain even though no additional worker was added to the economy.

The strength in the BLS Establishment report also flies in the face of the accelerating pace of layoff announcements from well-known names such as Amazon (AMZN) , Twitter (TWTR) and Meta Platforms (META) as well as a spike in recent Challenger, Gray & Christmas layoff readings.  I think eventually when items get resolved they will show a much weaker jobs market than currently is reported by the BLS.

As Bank of America's Chief Strategist Michael Hartnett somewhat sardonically stated last week, "Unemployment in 2023 will be as shocking to Main St consumer sentiment as inflation in 2022."

The question is whether the central bank realizes the jobs market is weaker than reported before it pushes the economy into a full-fledged recession by continuing to rapidly hike interest rates.  This is likely to continue to be my greatest worry for equities as we head into 2023 given the central bank's recent misstep in regard to the persistence of inflation.

Get an email alert each time I write an article for Real Money. Click the "+Follow" next to my byline to this article.
TAGS: Economic Data | Economy | Federal Reserve | Interest Rates | Investing | Jobs | Stocks | Real Money