One thing is for sure, the pullback didn't waste any time getting in gear.

Often, we see days of meandering and push and pull before we get a down day, but that was not the case this time. No, this time the pullback began right on time.

I do think even if we rally on Wednesday, we are likely to see more pulling back before the month is done.

I do, however, want to begin with an interesting question I got on Tuesday. I was asked if there were other times when Nasdaq was at its high and the Overbought/Oversold Oscillator was oversold. I couldn't think of any off the top of my head, but since we were discussing tops on Monday, I decided to look at 2000.

The reason I decided to look at the year 2000 was my recollection was that just as Nasdaq was topping out, all the value stocks were bottoming, so I thought perhaps we saw a similar condition then. I was somewhat surprised by what I saw.

The Overbought/Oversold Oscillator is the 10-day moving average of the net of the advance/decline line. So I looked back 10 days prior to the March 2000 high in Nasdaq and was surprised to see that for six of the 10 days prior to that 2000 high breadth for Nasdaq was red. What's more is Nasdaq rallied 10% in those 10 days.

The red line on the chart shows us where the Oscillator was as Nasdaq made its high that year. That's interesting, because it was at a similar level to the two blue marks on the chart, meaning it would have appeared oversold on the chart, similar to today. 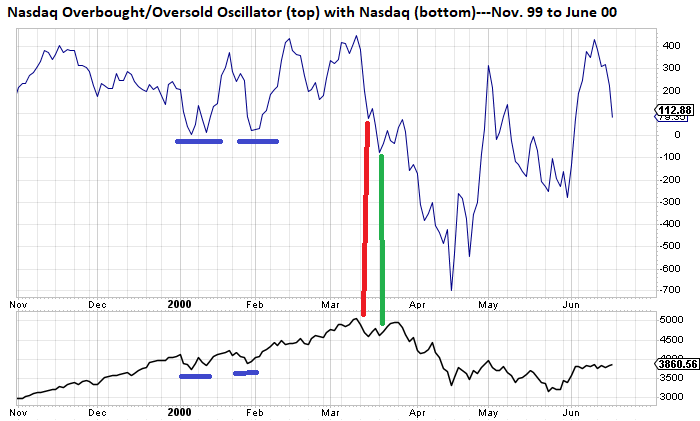 Nasdaq corrected nearly 10% in two weeks and the green line shows us the Oscillator got a smidgen more oversold. The rally back to 5000 on Nasdaq looks like a blip on the Oscillator chart. And, well, you can see what the rest of the decline looks like on the chart.

One final point to make on this topic is that I recalled biotech peaked well before Nasdaq did in 2000 and since we discussed the XBI, an exchange-traded fund to be long biotech earlier this week, I looked at what Amgen (AMGN)  was doing in 2000. There was no biotech index or exchange-traded fund back then, and AMGN was probably one of the largest biotechs, so I used it.

The failure to make a new high (red line) is not a big deal; it's more of a yellow flag. But look at that early March slide to that red arrow for Amgen. This was while Nasdaq was tacking on an additional 10%. So it must have been the biotechs that had given Nasdaq such poor breadth back then. 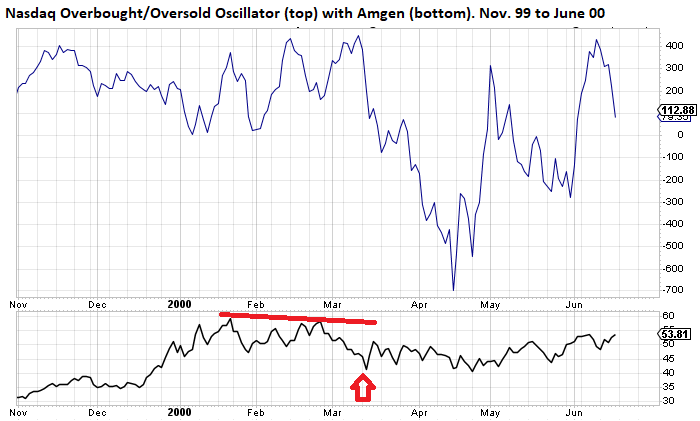 Again, I want to reiterate that I will not know if we are at the top or have seen the top until well after the fact, but sometimes it is good to go back in time and see if any conditions are similar and in this case there are some.

As for Tuesday's action, the number of new lows expanded once again and the McClellan Summation Index has rolled over. Since we have gone through this cycle of overbought to oversold and back again so frequently this year I would remind you the routine should be the same. The market will eventually get back to an oversold condition and the number of new lows should start to contract at some point and sentiment should turn sour once again. That's what I will look for to say the pullback is done.

Get an email alert each time I write an article for Real Money. Click the "+Follow" next to my byline to this article.
TAGS: Investing | Stocks | Technical Analysis | VIX