Did you ever have one of those days? I think Warren Buffett was having one Thursday, as Teva Pharmaceutical (TEVA) and Kraft Heinz (KHC)  both plunged to new 52-week lows on the back of sell-side downgrades. On the heels of the widely-reported news of Berkshire Hathaway's (BRK.B) $340 million loss as a result of investments in tax credits led by DC Solar, which The Observer and others have described as a Ponzi scheme, it has not been a good month for the Oracle.

As Real Money readers know, I let the numbers guide me, and BRK.B has lagged its Morningstar cohort not only for the past month, but for every measurement period greater than one month. The figures are in the table at the end of this column.

I am not taking personal shots at Buffett, I am just saying that he has not been able to produce returns above those implied by systemic factors -- i.e. alpha -- in this economic cycle.

The second table, below, shows Buffett's baker's dozen of top holdings as of March 31, as reported by the company in its 13-F filings on May 15. Obviously, these holdings can and do change, but this portfolio is questionable, at best.

Apple (AAPL) is Berkshire's largest holding, nearly double the size of the number-two holding, Bank of America (BAC) . It has been a tough month for the Cupertino giant's shares, owing to trade war concerns, but I cannot argue that AAPL is a solid long-term hold. It is digging further into the portfolio that the worms start to come out of Berkshire's apple, though.

Four of the top 8 holdings are banks, i.e. deposit-taking institutions, and two of the others are non-bank financials, American Express (AXP) and Goldman Sachs (GS) . I have no idea who is running this portfolio on a day-to-day basis -- Todd Combs, Ted Weschler, Buffett himself or some combination of those three -- but I have a quick news flash for the Omaha braintrust: The yield curve is inverted. Why would you want to have such a bias toward U.S. financial companies (the yield curve was inverted in the first quarter, as well, although not for the entire 90 days) in this interest rate environment?

I own no bank stocks. I believe Goldman is an out-and-out short here, as well, if equity markets continue their recent slide.

On the consumer side, I have to be fair and note that Coca-Cola (KO) is working in 2019, putting it on track for its first year of market outperformance in the past five. Kraft Heinz is obviously a dumpster fire, and one that was created by Buffett and his Brazilian cronies at 3G. Also, I will never understand Buffett's fascination with the airlines, and I don't hold shares in either Southwest Airlines (LUV) or Delta Airlines (DAL) , two of Berkshire's top 13 holdings. Other than markets in which the population is growing and incomes are just entering the point at which consumers travel for work and pleasure, there's just no long-term growth in the airline sector. DAL has little presence in China while LUV has none at all.

But what of all the hype of Buffett finally befriending Bezos and buying Amazon (AMZN) ? The Seattle-based giant shows up at only number 26 on the holdings list, and BRK's sub-$1 billion stake in AMZN actually represented less than 10% of the value of BRK's holdings in Kraft Heinz as of March 31.

Of course, all of these weightings could have changed, but without the Oracle's ear I can only go by the most-recent figures.

It's not a well-balanced portfolio. At all. That is why it has underperformed its benchmark in every relevant period and why I believe that underperformance will continue.

Also, if there is any deterioration in the credit profile of the U.S. consumer, Berkshire's portfolio is in big trouble. Already signs of such weakening are emerging. According to Bloomberg Intelligence, the charge-off rate for U.S credit card issuers hit 3.82% in the first quarter of 2019, the highest figure recorded since the second quarter of 2012.

It is easy to spit on high-profile Buffett blow-ups such as Kraft Heinz and Teva, but it is the profit pressure building in the "meat" of his holdings -- U.S.-based financials -- from the pincers of a flattening yield curve and worsening credit metrics that really make Berkshire stock an "avoid" now. Be careful backing Buffett. 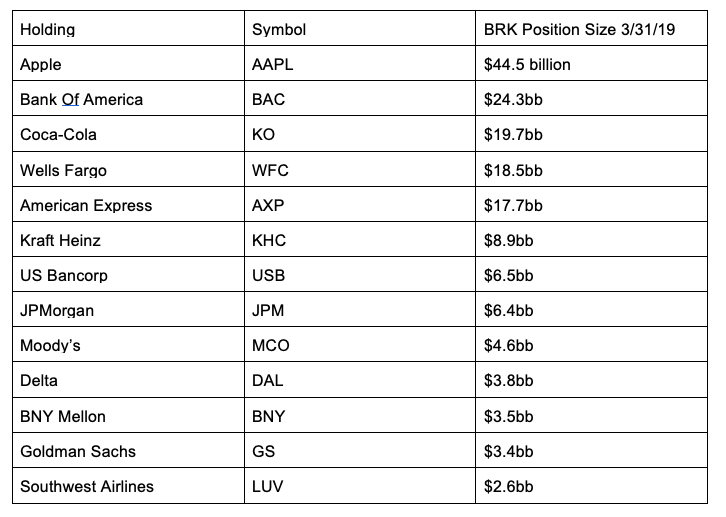 Get an email alert each time I write an article for Real Money. Click the "+Follow" next to my byline to this article.
TAGS: Investing | Stocks | U.S. Equity | Global Equity | Warren Buffett