At the top of Jim Cramer's Mad Money program Wednesday night he talked about short-covering when written-off and left-for-dead companies surprise to the upside, causing a lot of forced buying. That was the case with four stocks Wednesday, which Cramer detailed on Real Money. This short list included the New York Times Co. (NYT) . According to www.shortsqueeze.com there were more than 16,000,000 shares of "The Gray Lady" that were shorted as of the last monthly report by the exchange.

The New York Times may be the butt of jokes at the White House, but the subscription economy is for real, and Cramer said that helped NYT gain 10.3% by Wednesday's close. So while it may seem strange the market can be led by short-sellers covering their losses, that's exactly what happened Wednesday. Let's check the charts and indicators to see where the NYT may go from here.

In the daily bar chart of NYT, below, we can see a bullish technical setup before Wednesday's rally. Prices traded sideways from last February with buyers coming in to accumulate shares in the $22-$21 area -- in April, August, September, December and early January. Prices rallied above the rising 50-day moving average line in January (before the recent spike higher) and also above the positively sloped 200-day moving average line. The volume pattern is positive with volume increasing on the rallies and contracting on the pullbacks.

The daily On-Balance-Volume (OBV) line shows a positive trend the past 12 months, telling us that buyers of NYT have been more aggressive for months. The Moving Average Convergence Divergence (MACD) oscillator crossed above the zero line in the middle of January for an outright buy signal before Wednesday's breakout. I don't know why some people or funds shorted NYT but the technical signals have been bullish for some time now.

In the weekly bar chart of NYT, below, we can see that the uptrend in NYT is not a new development. Prices have been in a rally phase since late 2016. The rising 40-week moving average line has done a great job in identifying the uptrend and buying opportunities. NYT is still above the rising 40-week line.

The weekly OBV line shows both a longer-term positive trend but also strength from the middle of December. The OBV line is not far from making a new high for the move up. The weekly MACD oscillator shows a recent cross to the upside from above the zero line -- this is a fresh outright go long signal.

In this Point and Figure chart of NYT, below, we can see a longer uptrend for the Times going back to 2011. An upside price target of $40.50 is being projected. Another bullish signal. 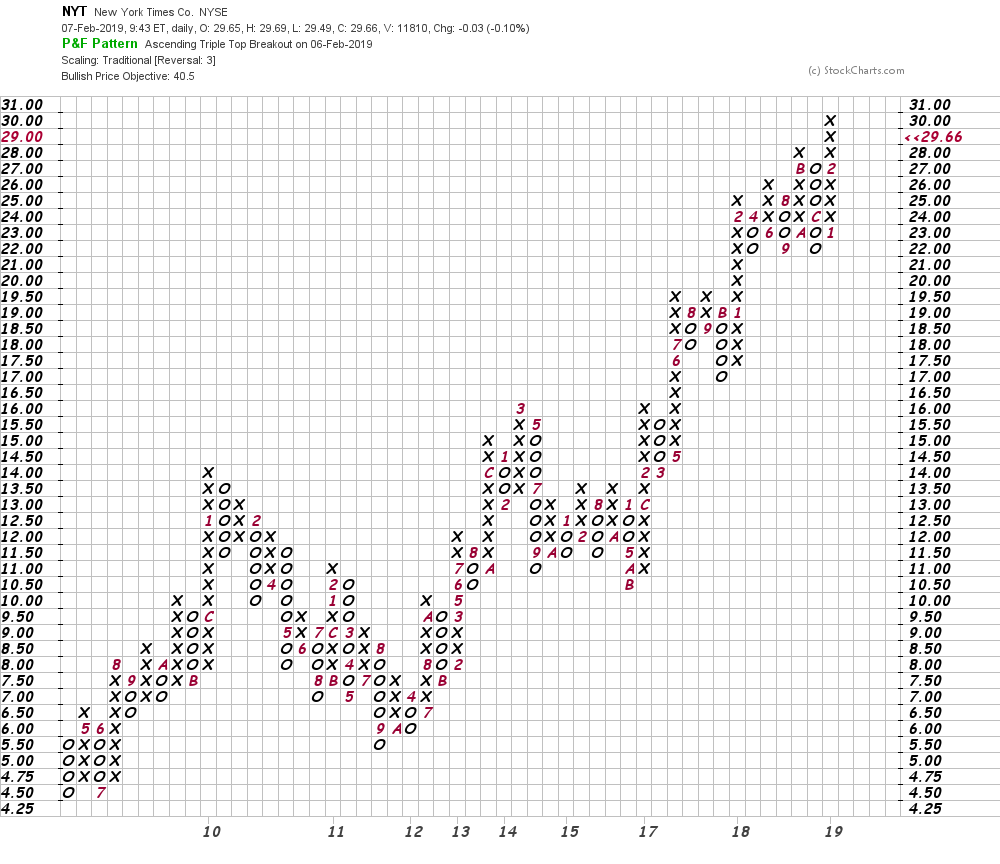 Bottom-line strategy: I have no idea why someone would have shorted NYT as the technical signals were clearly bullish. NYT is likely to trade sideways for a week or so longer before trending still higher. Longs should risk a close below $26 for now.

Get an email alert each time I write an article for Real Money. Click the "+Follow" next to my byline to this article.
TAGS: Short-selling | Investing | Stocks | Technical Analysis | Newspapers