There was one technical event of note for the major equity indices Wednesday.

The Nasdaq Composite closed above its near-term resistance and short-term downtrend line and that shifted its trend to neutral from bearish.

Overall, we find the short-term index trends staying a mix of bullish and neutral implications with only one remaining in a downtrend. Cumulative market breadth has yet to turn positive while the bulk of the data, with the exception of the weekly sentiment numbers, remains neutral.

Let's dig a little deeper on the charts and data. 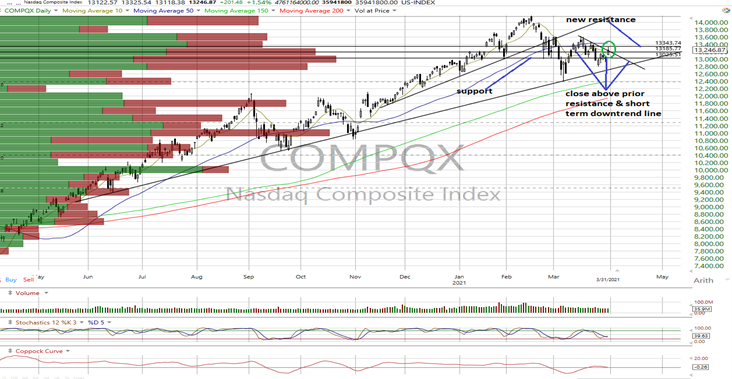 The indices closed mostly higher Wednesday except for the DJIA and Dow Jones Transports, which posted minor declines.

Internals were positive on the Nasdaq while the NYSE saw positive breadth but negative up/down volumes.

The only technical event of importance was the Nasdaq Composite (see above) closing above resistance as well as its short-term downtrend line. It is now neutral from its prior bearish trend, as are the Nasdaq 100 and MidCap 400.

Trends for the S&P 500, DJIA, Dow Jones Transports and Vale Line Arithmetic Index are positive, while the Russell 2000 remains in a near-term downtrend.

Cumulative market breadth remains lackluster with the All Exchange and NYSE A/Ds neutral and the Nasdaq's negative.

The Open Insider Buy/Sell Ratio also saw an uptick in insider buying activity to 37.1 but remains in neutral territory.

Valuation still appears extended with the forward 12-month consensus earnings estimate for the S&P 500 from Bloomberg lifting to $174.76 per share, leaving the S&P's forward P/E multiple at 22.6x, while the "rule of 20" finds fair value at 18.3x. We reiterate the valuation spread has been consistently wide over the past several months while the forward estimates have risen rather consistently.

The 10-year Treasury yield rose to 1.75% and, in our opinion, remains in an uptrend with potential to test the 1.8% level. We continue to monitor it closely as it has been having rather significant influence on the equity markets of late.

The combination of charts and data have yet to alter the weight of the evidence that would warrant a change in our current "neutral" near-term macro-outlook for equities.