Did you see what happened? We had another day where the small caps and value went in a different direction than the mega-cap growth stocks. This has been going on for two weeks.

Oh sure, some will say that it's been going on for months, but as I noted, it started to become an every other day occurrence two weeks ago and Thursday was just an extension of it. I was asked why.

Why can't the two groups move together?

I am sure there are a lot of reasons that someone can give, but the market acts like there is just so much cash out there, so if one group goes up another has to go down. It can't be that simple, but that's the way it seems these last two weeks.

In any event, breadth held in there and was barely red on the day, keeping in line with the barely green Russell 2000. Therefore, none of the indicators have changed. There was one statistic that is worth noting, though: the number of stocks making new lows on Nasdaq ticked up. It wasn't enough to change the moving average, but there was an increase for the day.

What I find fascinating is that the breadth has been relatively good, similar to the way it was in February, but it has not translated into a solid move back up for the McClellan Summation Index. I noted it had flattened out earlier in the week, but that's it so far. That means that any day with negative breadth will turn it right back down again.

In terms of the sell off in mega-cap tech, the channel for the Invesco QQQ (QQQ) is still intact for now. Here it is without the upper line, so that you can see that lower line clearly. It hasn't changed since I showed you this chart over a week ago. I am still of the mind that we will make our way down to the lower line as we have during every pullback since April.

I was going to take a day off from noting how well the banks acted, but I can't. Just another push up and maybe the Bank Index will find some friends. Hope springs eternal.

Then there is sentiment. I still think it is complacent. Here is the 10-day moving average of the equity put/call ratio. It's gotten so low for so long that it actually turned up this week. I guess it was too much of a good thing. Remember we tend to get market corrections when this goes up.

Finally, I thought I would update you on the 21-day moving average of the exchange-traded fund put/call ratio. We looked at this earlier in the week and I noted if we had a few more days with low readings, it would head down and it is doing just that. It is not yet at the extremes it was at in January 2018 or February of this year, but if these low readings keep up for three or four more days, it will be. 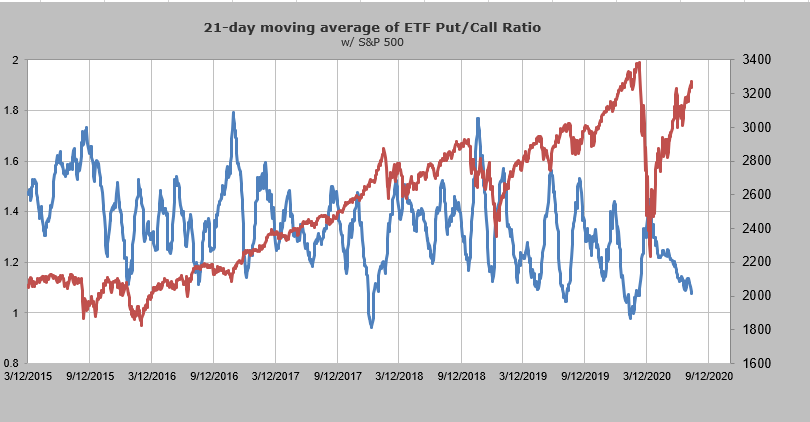 Get an email alert each time I write an article for Real Money. Click the "+Follow" next to my byline to this article.
TAGS: Investing | Small Cap | Stocks | Technical Analysis | Value Investing | Technology |