'Hakuna Matata' means no worries for the rest of your days.

I don't know about you, but I kind of like the drive that a little anxiety puts in my gears. No joke.

You can check with colleagues. I sometimes allow "badly against me" options to be exercised instead of cutting them off at the pass, just for thrill. Like so many others, I play the game with so much more intensity when my tail is getting kicked all over the field.

That said, I'm long Walt Disney Co. (DIS) here. In fact, I've been long the name for a year (sans a misguided bout of profit-taking that I went through earlier in 2019 that forced me to pay $7 a share just to get my position back to full size).

The new version of Disney's 1994 classic The Lion King hit the box office this weekend, pulling in $54.7 million just on Friday just in China. The film ended up generating $269 million of box-office sales globally over the weekend, including $185 million in the United States.

And remember, Disney still has headline titles Frozen 2 on deck for November, as well as Star Wars: Episode IX during the holiday season. The mouse is beefing up his library in preparation for the launch of new streaming service Disney+ later this year.

That service will be bundled with Disney's much improved Hulu and ESPN+ to form a discounted version of what used to be the cable box. In my opinion, this will knock the socks off of the competition -- including the cash-burning, somewhat content-disabled and very expensive Netflix (NFLX) .

Now Disney probably won't turn a profit in the streaming business. But it doesn't have as long as its cable TV operations remain profitable, its box-office performance keeps doing its thing and its Travel segment (theme parks, lodging and cruise ships) keep hitting on all cylinders.

I Scream, You Scream, We All Scream for New Streams

And it's not just Disney that's entering the streaming world. Apple TV is on the way from Apple (AAPL) , as is HBO Max from HBO parent AT&T (T) .

All of this has me thinking that this will only put downward pressure on margins across the business. Disney has the cash flow elsewhere to put up a long fight, as does Apple, Amazon, and AT&T.

But Netflix? Maybe ... but not definitely.

DIS formed a small cup-and-handle pattern recently after a very successful break-out of much larger cup-with-handle: 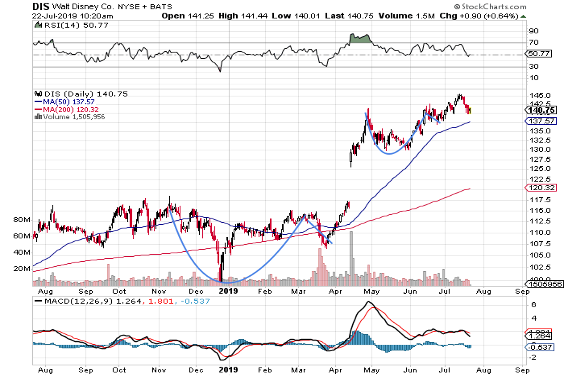 The current pivot stands at $144, which must be seen as resistance (at least for now).

For now, my price target is very aggressive at $170, even though the rest of the street averages just about $157. Part of my bullish thesis involves an expansion of multiple that goes beyond the current 21x forward price-to-earnings ratio.

That's based my expectations from growth and valuation that will likely be pulled away from Netflix. (I expect Apple to benefit from such multiple-expansion as well.)

By contrast, Netflix looks broken, at least for the short term.

Where will the cult of NFLX fans come to the rescue? We're probably close now, as $300 provided resistance in early December and some algos might try that spot: 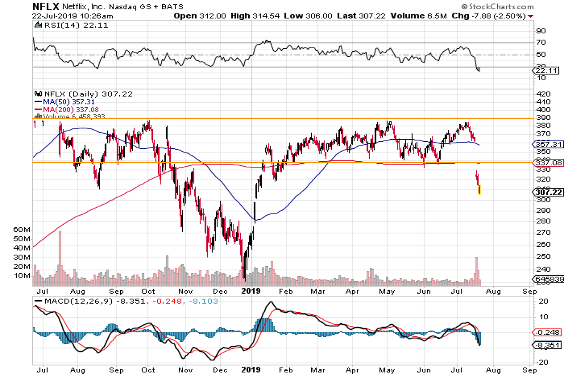 But longer term, I believe that anything down to the $230s is possible. You know that cracking both the 50- and 200-day SMA forces risk managers to pressure portfolio managers. That's where we are right now.

How should you trade all of this?

Well, a trader looking to exacerbate rather than hedge this theme might short NFLX and buy DIS with the proceeds. For every one share of NFLX sold (let's say at around $307), you'd buy two shares of DIS at about $140.

This is where discipline comes in. The money raised and spent has to be kept in line with a 0.912 ratio. If the money gets out of whack, just walk away.

Still, I'll likely try this trade in a controlled size outside of my other Disney positions just to see if my "gut" is right. However, I won't take a big enough position to hurt me big time. After all, I have a family that trusts me to not screw things up too badly.

(This commentary originally appeared on Real Money Pro on July 22. Click here to learn about this dynamic market information service for active traders and to receive Doug Kass's Daily Diary and columns from Paul Price, Bret Jensen and others.)

Get an email alert each time I write an article for Real Money. Click the "+Follow" next to my byline to this article.
TAGS: Investing | Markets | Stocks | Trading | Stock of the Day

INFO is in a strong and durable uptrend.

The construction company's shares aren't for the faint of heart as they have been whipped around in recent years.

5 Companies Most Affected by Coronavirus

Be prepared for 'China' to become a one-word palliative to ease investors' worries about weak guidance for corporate earnings in the March quarter.