Sentiment, as you know, is a funny thing.

It's because human nature simply does not change. Markets change, markets evolve, but we humans simply do not. Oh, we try, but somehow or another, when stocks go down or up, sentiment, and more likely, narratives, change.

We saw that in a big way these past few days as the majority of stocks had been falling for months and no one cared, because, hey, the senior indexes were doing just fine. But then they hit the index moving stocks and with it the indexes and all of a sudden there were lists of reasons why. And along with the lists, there was cautious talk.

It makes a ton of sense really. None of us wants to be wrong, especially on the market. Not only do we look foolish, but we lose money. So there is emotional and financial pain involved with being wrong. But being wrong is a fact of market life and anyone who tells you otherwise is simply lying to you.

So, did the sentiment shift on Tuesday, after the big oversold rally? Minimally. I would categorize it as more relief the selling had stopped and portfolios found some gains. For example, the put/call ratio was .78, which is neutral.

One final point on sentiment I would make, and it has to do with bonds. We had that big move up in prices (down in rates) and two weeks ago it was explained away as "technical." I honestly never understand what that means. Does that mean only technical analysts and traders are trading it? My take is that it means, "I have no idea why the bond market did what I didn't think it could do, so I am blaming the technical set up."

But by Monday there was now a narrative attached to the bond trade. The move was no longer "technical." Now there was a list of reasons. The Delta variant. A slowdown in the economy. Inflation has backed off. You name it, there was now a reason for the move in bonds. Just as the Daily Sentiment Index (DSI) tagged 91.

But back to the stock market and the oversold condition. The Overbought/Oversold Oscillator is based on the 10-day moving average of the net of the advance/decline line. So we look back to see what numbers we are dropping. Take a look at the big red numbers we drop over the next week or so for Nasdaq. I look at that and think even if we pull back later this week, we'll still be pretty oversold next week, too. 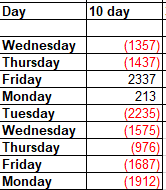 I think there ought to be some backing and filling and retracement. Not only would it be natural after a day like Tuesday, there are so many charts with quite a bit of damage that it would make sense. But the oversold condition is still with us.