The holiday came. The holiday went. Spoke to neighbors. Chatted up old friends. Hung out with family. One thing came up often enough, but only if I initiated. Plenty of folks that I speak with just do not see the financial markets as significant to their lives. Don't even realize that in some ancillary way, they might have exposure. Even more interesting... they don't care. Some hadn't even been aware that markets have been tough for about a quarter, and that December has just been terrible. I have seen this trend toward public indifference brewing for a number of years now, but it feels to me as if the individual who spends eight or more hours doing something else for a living has, more than ever, emotionally detached themselves from the marketplace.

The hard reality remains that the financial markets are, in the long term, forward-looking. But in the short-term, they are dominated by high-speed electronic trading. Anyone who felt Monday's (December's, Q4's) meltdown, or watched Tuesday night's reopening of equity index futures, watched in entertained astonishment, if not anguish. Clearly, sentient, reasoned thought has now been sacrificed at the altar of short-term profit. The task is to come up with a thesis moving forward, and the challenge is to stick to that conclusion at times when the evils of algorithmic, high-frequency and passive trading styles turn against those core beliefs. Risk Management. Before one might profit with sustained regularity, one must learn to effectively preserve one's capital.

As headlines will scroll on Wednesday morning extolling just how well the holiday shopping season went this year, there is no denying that while the economy continues to show weakness in spots, overall the data remains, especially across labor markets, solid. The Fed, while probably laying out the most-hawkish trajectory possible under current conditions going forward, at least seemed to remain open to further adjustment -- and therein illustrates the problem.

The forward-looking signals, market prices for equities, commodities and debt scream caution. They scream at some unknowable, shadowy figure in the cobwebbed corner of an abandoned room. These lagging indicators... the data, to some degree, seem reassuring. Changes in monetary policy take time to work their way through to the real economy, maybe as much as six-to-nine months. Quantitative tightening continues to drain from the economy every month 10x the amount requested for this president's border wall, that has been deemed enough to shut down the government. Please allow that to sink in. Why? Because that is incredible. This lag is why data dependency is not good enough. Who care where we have been? The Roman Empire did fall.

There are some estimates that this monthly removal of liquidity tightens monetary conditions as much as would an extra one-quarter point hike in the Fed Funds rate every three-to-four months. Quite simply, this means that even if the central bank were to halt their own trajectory for policy in place right where it is now, the domestic economy would experience the impact of aggressively tighter policy at least into the second half of (and probably further into) 2019.

Does This Swoon End in Recession?

There is no doubt in my mind that markets are signaling something awful. I don't think anyone bothering to read the midnight ramblings of this madman would argue this point. Just what is it that markets see ahead? Broad negative exposure to a systemically important institution? A sharp change in the direction of economic growth? Is this how the debt super-cycle finally ends? That last possibility is surely far more horrific than the rest, but you and I both know that this ending hunts day and night, and will be merciless in its conclusion.

Every one of you knows that it does not take a lot to turn an economy. In our instance, an economy that had probably reached the latter stages of where it could possibly go on artificially (now-halted) benefits of monetary stimulus. Whether those benefits be considered in fact artificial, or merely pulled forward, is immaterial -- both possibilities leave gaps in forward demand.

If only that were all, we then switched gears to fiscal stimulus by virtue of increased deficit spending -- just to push the envelope a bit further. Perhaps this was poor timing to try to correct imbalanced trade conditions and illegal trade practices that for too long had been considered business as usual. As if losing these twin engines, and the engagement in a trade war (justified or not), were not enough to knock loose a couple of economic teeth, there is the political climate in this nation to contend with. That climate distracts from what is important, and is clearly unhealthy. This condition will likely get worse, not better.

I, like yourself, have been though a few recessions. I have been present during the worst moments of national crisis. This never becomes old hat. Yes, this market feels like those markets did, but understand that markets are different now. Methods of investment -- and perhaps more importantly, the method of price discovery -- have evolved... perhaps, in my openly biased opinion, to the detriment of the public. Can I confidently predict recession? No. I do honestly feel, however, that something awful is to our front. I hope I am wrong. I really, really hope I am wrong.

Still, we do not fear. We maintain composure. We understand. We identify. We adapt. We overcome. Repeat these steps as often as necessary. On an intellectual, and perhaps even a spiritual, level, think about what you do. No decisions on the fly. No taking shots here.

Chart of the Day: Intel

I screw around with charts all the time. I look at a lot of balance sheets, too. Analysis is analysis. In my opinion, any trader using either technical or fundamental analysis to the exclusion of the other, without also making any attempt to mesh macroeconomic trends and expected policy impact into one's conclusions is really not putting in the necessary work.

Labor of love? Not really. More like the need to hunt and kill in order to provide. Well, last night after downing more cookies and Irish whiskey (great combo) than a man my age probably should, I saw a headline. Israel had approved a $185 million grant for Intel in return for a $5 billion expansion plan for the firm's operations in that country. Made me pull up the charts on the name.

While I think I see support that could come in as high as $42, and perhaps as low as $41.50, it was the Fibonacci Time Zones that really caught my eye. Lining up the lows of 2017 as a start point, these time lines seem to turn direction, sometimes short-term, and sometimes to far more significant effect, but they do seem to work. Guess what? The name seems to be closing in on such a line right freaking now, Tex.

I remain long some Intel (INTC) . Yes, I have repositioned myself far more defensively; but still I retain at least trace positions in many of may favorite tech names, even those exposed to China. Dry powder is not a problem, as I have publicly encouraged higher cash levels for close to 11 months now.

Given that Intel has really executed quite well (in my opinion) in the absence of a permanent CEO, that interim CEO, Robert Swan as been adding shares and that the name pays shareholders 2.75%, I think this will be the first tech name where I start rebuilding my position, albeit slowly. Yes, I am still working my way out of Micron Technology (MU) , and still managing Nvidia (NVDA) through net-basis manipulation. This will be a process. So will be getting back in shape, physically. Will I win this one? They say that past history is no guarantee of future results. Guess I'll just have to let you know. 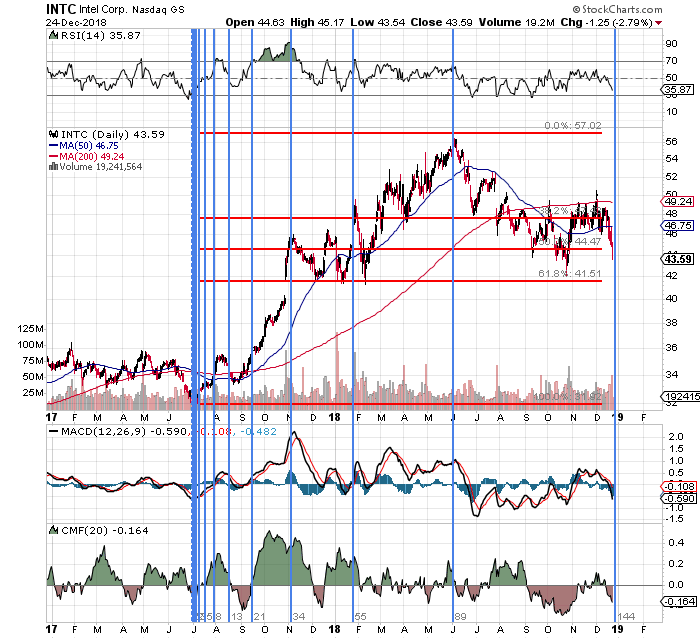