Several people asked my thoughts Wednesday on Fed Chair Jerome Powell's statement. Was it hawkish or not?

Here's my answer: I don't know, because it sounded like there was very little change in his tone to me. I felt as though he said the same thing he has been saying. But I am not a Fed watcher, and it's probably a good thing, since if there was much change, I did not see it.

All I know is that we got the rally I thought would begin on Tuesday. And so it feels to me like all we've done is a lot of wheel spinning so far.

Let me note that the statistics from Wednesday's rally were not terribly impressive. The Overbought/Oversold Oscillator, which is why I thought we'd rally early or in the middle of this week, finally made it through the zero-line. But with the S&P at the old high, I would have much preferred the Oscillator be at positive 500, not just over the zero-line. It gets a bit harder for it to make progress in the next few days. It's the math.

The turnaround in breadth was impressive though, but it really could have been better. The S&P gained 75 points and net breadth was positive 1,060 on the New York Stock Exchange. To put that in perspective Tuesday's 35-point decline in the S&P saw net breadth at a negative 1,370. So, the S&P gained 40 points over two days and net breadth is still down about 300 issues. Remember that rallies with poor breadth are ultimately bearish if it doesn't change.

We might even highlight volume, because the NYSE saw a mere 58% of its volume on the upside. Nasdaq was a tad better at 68%.

The number of stocks making new lows remains high, but thus far neither the NYSE nor Nasdaq have expanded beyond their peak readings and the 10-day moving average is still heading down for both exchanges.

The Investors Intelligence bulls ticked up a bit to 43%, but this is still a low reading for the bulls. The put/call ratio remained high. But it has been high for so long that the 10-day moving average finally curled down. I have been waiting for it to do so for a week. You will need to squint to see it, though. 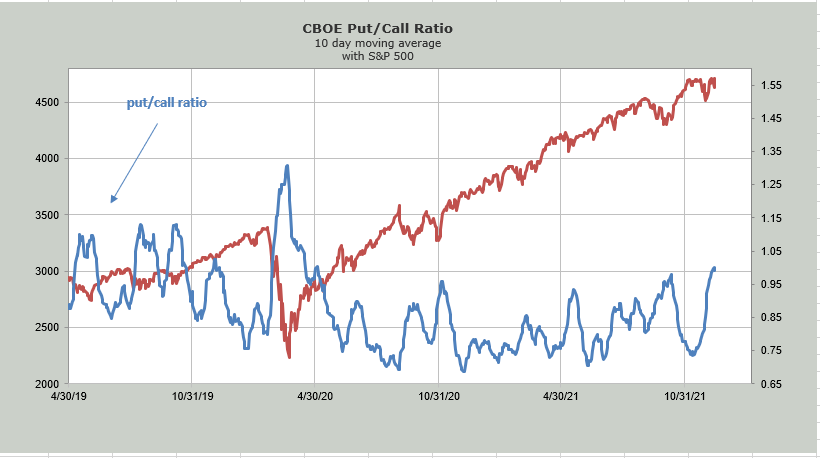 Coming into this week, I had a strong view we would rally one more time midweek, but now I have no short-term view. I can easily see a continuation or a stall out or even a pullback in the coming days. But considering the intermediate-term oversold condition, if we do pullback or chop, I still think Santa should visit this year.