Well we got the bond rally. And the Nasdaq rally.

But the Nasdaq rally was much more muted, especially considering what the bonds did. My view hasn't changed for this week; even if we go down on Monday, I still think at some point this week we set up for an oversold rally.

This leaves the S&P up about 2% on the year, but flat since Jan. 14. You may not view it as volatility, because mostly it has been a few days of hard selling here and there, but after the two months of persistent trending upward in November and December, there hasn't been a lot of trending going on in 2021.

Let's visit some of the intermediate-term indicators now. The 30-day moving average of the advance/decline line should get a lift this week, but it is not oversold. It is not even under the zero- line the way it was last fall. This is an intermediate-term overbought/oversold oscillator.

I noted on Friday that the Hi-Lo Indicator was still in the 90s and an oversold reading is under 20%. Currently Nasdaq's -- despite the decline we've seen there -- is at 88%. To put that in perspective, it was 42% at the late October/early November low. Friday saw the number of stocks on Nasdaq making new lows (and the NYSE for that matter) chime in higher than those making new highs, so I would expect this to come down rapidly in the coming weeks.

The New York Stock Exchange McClellan Summation Index is still heading down. It requires a net differential of advancers minus decliners of positive 3,400. That makes it oversold but the direction is what tells us where we stand and that is currently down.

For Nasdaq where I use volume for this indicator, the direction is definitely down. However, it now requires a net differential of positive 13 billion shares (up minus down volume) to halt the decline, which also makes it oversold in the short term.

On the sentiment side of things the equity put/call ratio zipped up to its highest reading (.63) since the October low (when it got to .77), which is short-term good news on the sentiment front.

On a more intermediate-term basis, the 10-day moving average sits at .45, which is not very high at all. In the fall this got to the mid-50s.

The National Association of Active Investment Managers (NAAIM) lowered the exposure quite a bit last week (from 108 to 88), but you can see they are not even where they were in late January (79) and nowhere near where they were in October when they dipped under 60. 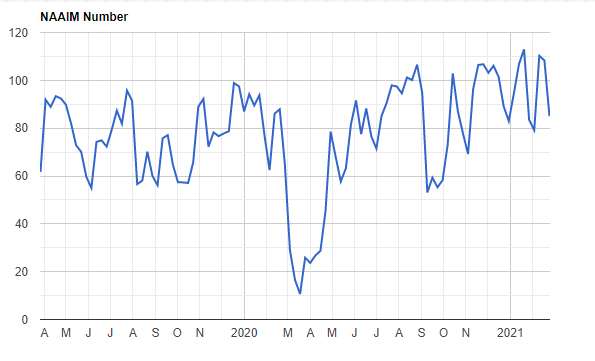 The Investors Intelligence bulls are at 56%, which is down quite a bit from the 65% they were at a few weeks back, but they were at 51% in September. I do expect this week's reading to come down some more so perhaps it will get closer to the September reading.

Even CNN's Fear and Greed index, which tends to drop to Fear at the drop of a hat currently, sits at 48. It was 36 a month ago at the late January low.

Finally, my unscientific weekend Twitter poll -- which had the most respondents so far -- showed just over 4,400, an astonishing 58%, were looking for the next 100 points in the S&P to the upside (42% looking for downside). The last time we had a down week and this happened was late September, so they were correct because we bottomed on Thursday that week. The main difference is all the other sentiment indicators were leaning pretty bearish then too and as you can see that is not the case now.

The results are in!! And quite frankly I should get my shocked face because I did not see this coming.

Thanks to everyone for participating. I think this might have been our largest sample yet!

When @Pointedmacro puts the chart together later I will tweet it out. pic.twitter.com/FSxUEI8VrH

In sum, this is why I think we are more likely to see continued volatility than not.