Those poor mega-cap tech stocks just cannot seem to get any love. It is downright shocking to believe that a mere six months ago they were all anyone wanted to own. Yet here we are.

That's why I will be interested to see if the newfound technology bears will highlight the head-and-shoulders top that has developed in the Nasdaq. If they, do then we will know that the shift from loving tech stocks to hating them has come full circle.

Let me talk about the statistics, though, since I am one who thinks the statistics and indicators are a better guide than a pattern on a chart. We'll begin with breadth, since, quite frankly, while breadth was good on Wednesday, it wasn't great. The New York Stock Exchange breadth was 2:1 when quite frankly it really should have been higher. So far, it has not been enough to change the current downward path of the McClellan Summation Index. That would take another breadth day similar to Wednesday's.

When it comes to volume, the NYSE saw 77% of the volume on the upside. Again, that is good, but not great. Two months ago, a day like we saw on Wednesday would have produced over 80% of upside volume. If it sounds as though I am nitpicking, I am.

Sticking with volume, let's talk about Nasdaq, because that was the lowest volume day since New Year's Eve. As a reminder, I have always been of the mind that we tend to rally on lower volume and we tend to see volume increase on declines. That six-week period from early January until mid-February was one of the few periods where price and volume rose together. I will take Wednesday's light Nasdaq volume as a sign folks are still nervous about tech stocks.

The NYSE, though, saw nearly 400 stocks make new highs, which is the most we have seen since the entire rally began. The more new highs we have the easier it is to find stocks to buy.

On the sentiment front, I don't think complacency is back, but it could arrive back with us quickly. However, this week's Investors Intelligence bulls chimed in at 56%, which is the fewest bulls since early November. About six weeks ago, just prior to the GameStop (GME) nonsense -- and, yes, I will always refer to it as nonsense -- bulls were kissing 65%, so that's a change in sentiment. 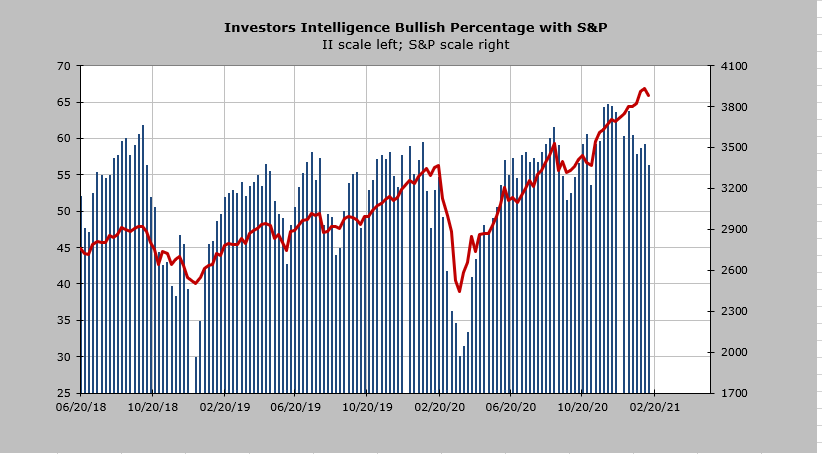 I will end by revisiting the chart of bonds using the iShares 20-plus Year Treasury Bond fund (TLT) , because the early morning panic did not have any follow-through.

TLT did not manage to close up on the day, but tried to. The Daily Sentiment Index (DSI) is sitting at 13, where it has been for three of the last five trading days. If bonds can rally, then those big-cap tech stocks probably get a bit of love too, enough to get them out of the doghouse for a few days.

I'm Working on Some Dip Buying

With the indices finally joining the party to the downside, we have the potential for some bottoming action.

The 2021 Tax Loss Selling Recovery Portfolio gave up ground over the last month yet continues to outperform key indices.

Positive chart and data signals have yet to appear.

Time for Caution in the Markets

For now, only the bold will take bigger risks and probably regret it in the end.