While three of the index charts posted new closing highs, they did so as poor market breadth deteriorated further, which implies a weakening underlying structure. As such, the index trends remain a mix of bullish, neutral and bearish projections. 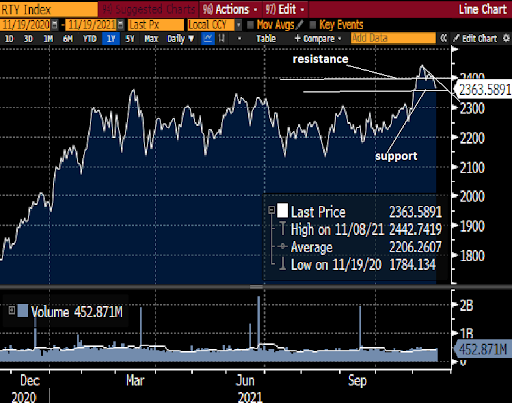 The major equity indexes closed mostly lower Thursday with negative internals on the NYSE and Nasdaq as both saw volumes rise from the prior session.

On the positive side, the S&P 500, Nasdaq Composite and Nasdaq 100 posted new closing highs as the rest declined. In our opinion, these new highs are somewhat suspect as the foundation upon which they are built (breadth) continued to deteriorate.

Regarding trends, The Nasdaq Composite, Nasdaq 100 and Value Line Arithmetic Index remain in near-term uptrends while the Russell 2000 (see above) is bearish and the rest neutral.

Looking closer at market breadth, the cumulative advance/decline lines for the All Exchange, NYSE and Nasdaq weakened further and remain negative as the Nasdaq A/D closed below its 50-day moving average.

The data finds the McClellan 1-Day Overbought/Oversold falling into oversold territory (All Exchange: -60.92 NYSE: -62.78 Nasdaq: -59.34). While oversold, they are capable of becoming more so.

The detrended Rydex Ratio (contrarian indicator), measuring the action of the leveraged ETF traders l,fted to 1.26 and remains inside bearish territory as they continue their extended leveraged long exposure.

The Open Insider Buy/Sell Ratio was lifted as well to 35.3 but remains neutral.

The details of the charts and data discussed above suggest we keep our near-term macro-outlook for equities at "neutral." Market selectivity persists.

Get an email alert each time I write an article for Real Money. Click the "+Follow" next to my byline to this article.
TAGS: Indexes | Investing | Markets | Small Cap | Stocks | Technical Analysis | Trading | Treasury Bonds | U.S. Equity