It seemed we could have been set to get a little bit of fear or panic or both Thursday morning, but in the end, that wasn't the case. What was the case, was that the market has been playing the week out exactly as it ought to have.

Late last week, we reached a short-term overbought reading and we were supposed to pull back or chop this week, and, so far, that's what we've done. Another reason I felt we were to chop or pull back was because of my Saturday Twitter poll that showed far too many are far too confident in more upside. It seems the market is doing what it is supposed to do.

Thursday saw breadth positive, while the big-cap indexes were negative. I always put that in the positive category, because when the troops are on the field, the battle is easier to win than when the generals are out there all alone. When there is good breadth, it's easier to find winners, because there are more of them.

In the end despite the big up on Monday followed by three down days, the indicators have shifted very little. The market really ought to work off this short-term overbought reading and rally again.

My issue with the market this week centers on sentiment. The put/call ratios haven't gone up much at all, and that keeps them low. The 10-day moving average lines are low so it's not just one day we're talking about.

Then there is the American Association of Individual Investors (AAII), who for months were steadfastly intent on not embracing the market. But this week they decided it was OK to wade back in. The bulls ticked up modestly, but they are now at the highest level since the initial rally off the lows in March.

Then there are the bears, which are now the lowest since pre-pandemic. They are still high, but you can see the change. Typically, I wouldn't fuss so much, but for the first time they are moving in the same direction and essentially reporting the same thing as the Investors Intelligence survey, which I highlighted here yesterday. 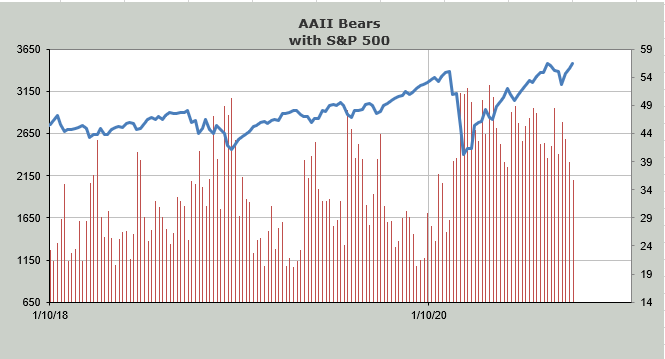 Add to this that the National Association of Active Investment Managers (NAAIM) has once again increased its exposure to stocks. NAAIM clocks in at just shy of 103 from just below 60 a few short weeks ago. It was at 106 in late August. 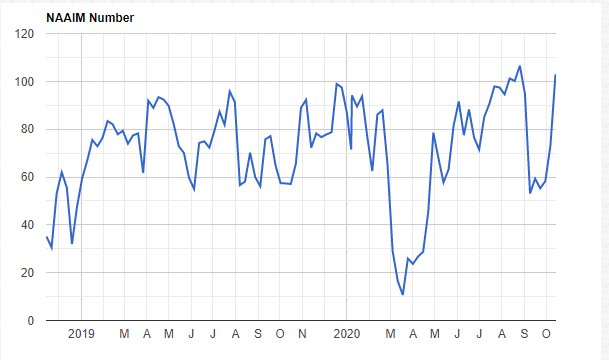