Perhaps it is how social media amplifies everything. Perhaps it is the non-stop play-by-play, where everyone fusses over every little tick in the market. But I recently considered that I can't even recall when exactly anyone labeled 1990 as a bear market. I can't recall when 2000-2002 was labeled one. And I certainly don't recall at what point 2007-2009 was called one.

And we all know that the majority of stocks began their bear markets in 2021, not in 2022. And certainly it was a bear market well before the S&P 500 got below that magical down 20% level.

Now the obsession is over whether we're in a recession. I also can't recall the fussing over a recession in any of those prior bear markets, although I do know that the National Bureau of Economic Research labels them -- after the fact. But they have always done it that way.

There is also another obsession that has cropped up recently: Is this a bear market rally or is the bear market over? I have said before and will say again, I certainly won't know until well after the fact. Yet, I see this statistic thrown around, that if a market rallies more than whatever percent off its low, then it can no longer be called a bear market. OK, maybe I have the exact phraseology incorrect, but in the last few days, a level of 4230 on the S&P has cropped up as some magical level that if we cross it then the bear market is over.

All I can think of is that if you waited for the official "we're in a bear market," which arrived in May/June, then you were selling the recent lows. Why not just focus on the indicators? Are they falling, as they were in most of 2021 and the first half of 2022, or are they rising as they have done since the late spring?

Yet, the indicators are still rising. The McClellan Summation Index hasn't rolled over, hasn't slowed its upside move. Breadth, even on days when it falters, hasn't rolled over. Nasdaq has had a contracting number of stocks making new highs in the last week, but for two days we've seen more new highs than new lows. If we go three days, it will be the first such streak since November.

Nasdaq's Hi-Lo indicator, which was grossly oversold two months ago, is now approaching the April high, so it is no longer oversold. It's neutral. 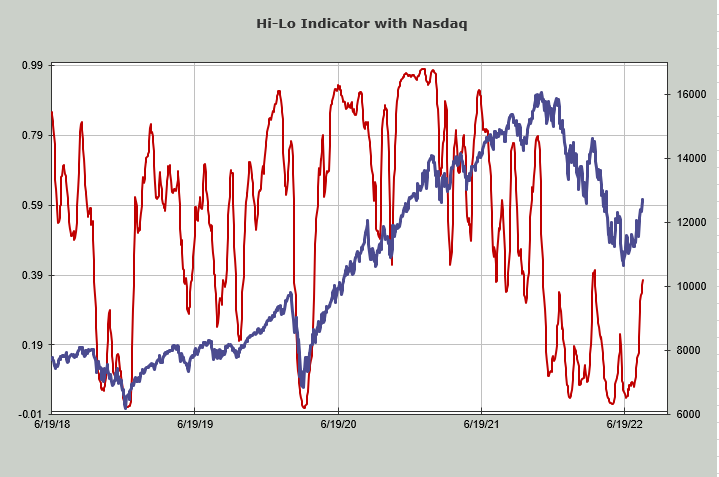 Sentiment, in my estimation, is what remains sticky. The way I see it, the first quarter saw many still hopeful, or at least not terribly bearish. However, in early May that changed. Fundamental folks turned bearish and have not been able to turn back. Is it the Fed? Is it corporate earnings? Is it the inverted yield curve? There is plenty to choose from. Whatever it is, it has kept sentiment from getting on board this rally the way it has during other rallies.

It's lifted off the extreme bearish readings, but in terms of a total embrace, that has not happened. Maybe if we cross that magical number, sentiment will change. In the meantime, the Volatility Index remains low, but the Daily Sentiment Index (DSI) sits at 20. A move to the low teens or a single digit reading would be a warning that complacency has finally returned.