Was it just one week ago we had that "Perceived Powell Pivot"? You remember it well.

At the beginning, the market had a crummy reaction and everyone said no pivot, no pause, nothing new. Then the market, in my estimation -- thanks to too many puts, the last day of the month and too many shorts -- rocketed higher. All of a sudden, the Perceived Powell Pivot was the talk of the town. At the time I said I thought it was the market's reaction that changed their narrative, rather than anything else.

As if you needed more proof, the Investors Intelligence bulls, which were published this week, but are based on data gathered through last Friday, chimed in at 43.5%, the highest reading since they tagged 45% in August. Clearly this week they would be lower. 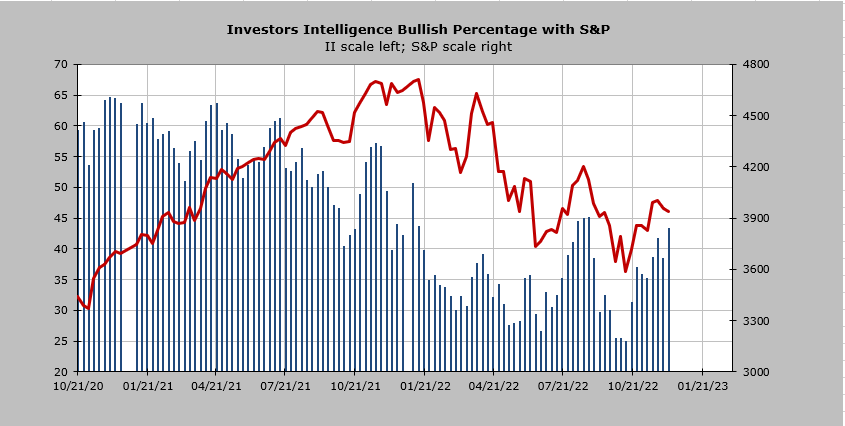 This week the fear is of recession even though the data from a week ago hasn't changed. We may be headed toward a recession. Clearly the inverted yield curves all lean that way, but didn't they lean that way last week?

I think the market got overbought and needed an excuse to come down and this is the excuse. Speaking of the Oscillator, you can see it is finally moving; now it is fractionally under the zero-line. It still needs time (and likely price) to get it back to an oversold condition but thus far it is doing what it is supposed to do.

You can even see the more intermediate-term 30-day moving average of the advance/decline line is finally heading down from its overbought condition.

Then there are the bonds, which have been screaming higher (yields lower). I see no reason to be bearish on bonds. Have they run too far? Yes. Should they pull back? Yes. But sentiment is not extreme. If we look at a chart of the yield on the Ten Year we see it at a critical juncture. A bounce in yields would not be out of the question.

If they opt to break I think the break would be short lived and similar to the U.S. dollar this week, would end up with a snapback.

Away from all of that, this is the time of the year that Wall Street strategists publish their year end targets for the S&P for the following year. Of the 16 published targets, I noted that 11 were under 4100 (keep in mind the S&P was at 4100 just three days ago). There were two at 4200 and the remaining three were over 4200.

That means when the S&P was at 4100, fewer than 30% of the strategists were looking for the market to be up in 2023 and two were looking for up 2%. I have no way of quantifying whether this has happened in prior years and if they were correct, but I do know that the boat for 2023 is clearly stacked to the downside with these folks.

Keeping in mind that it is my belief that the bear market started in early 2021 for the majority of stocks; that means we are going to be two years into it shortly. I am going to keep this in the back of my mind as this current downdraft moves back to an oversold condition and bearish sentiment picks up. Perhaps we'll see stocks begin to hold and make bottoms. At least it's something to consider.