So here we are. Back to overbought. The interesting part is I was asked if it will matter.

It is possible it won't matter but as you know, if you have been reading me on Real Money, I have had this coming week earmarked as the period the market is ripe for a pullback and so far I don't see much to deter me from that view.

First there is the overbought condition. My Oscillator is based on breadth. It is the 10-day moving average of the net of advancers minus decliners. What I do is I look back 10 days ago to see what sort of breadth numbers the market is dropping.

When we are dropping a long string of red numbers I say we're oversold, as I did two weeks ago.

When we are set to drop a long string of positive numbers I say we're overbought.

The way to look at it is, for example, on Tuesday we're dropping +1,821 and on Wednesday it's +1,682. For the Oscillator to go up even more we'd have to replace +1,821 on Tuesday and +1,682 on Wednesday with numbers greater than that. Even if we replace Tuesday's reading with something like we saw last Friday, which was +330 (which is not a great reading for a market where the S&P 500 is up 18 points) the math makes the Oscillator go down. 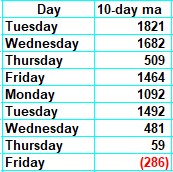 An oscillator is what gauges momentum and if you replace +1,821 with +330 you might still be positive but you are losing momentum. That is the definition of overbought.

Then there are the number of stocks making new highs. On the NYSE that reading peaked in early January at 375 and has not been able to surpass that reading since. Friday's rally saw 244 new highs which was fewer than earlier in the week.

If we take a look at the channel that has been in place for the S&P 500 since November we can see the S&P is not far from tagging the upside. Each time it has seen a pullback. All were short-lived but a pullback is what we saw.

I would also note that similar to mid-January breadth took a breather last week. By "breather" I mean it stopped leading. In the final two days of the week the S&P gained 25 points and breadth gained 50 issues.

Then there is the Nasdaq volume. Last week I explained how net volume (up minus down) for the Nasdaq has only been negative three days this year, which is very positive overall. Last week saw Thursday and Friday came in with negative volume readings. Those were the first consecutive days since late October. In the big picture it's no big deal but in the smaller scheme of things it is a pattern change. And pattern changes can lead to shifts in the market.

We already know that sentiment is back to complacent from two weeks ago when we had wiped the complacency clear out of the market. I see no reason why we shouldn't wring some of that complacency out again.