What a difference a day makes.

We had a few days of chop and the gloom had set in. Now we've had one day of rallying and while I would not call folks giddy -- certainly not the way they were after the consumer price index report -- I would say they are relieved and warming up.

Here is an updated chart that we looked at a few weeks ago. Breadth is on the top and the S&P is on the bottom. You can see they are in synch for the most part. What we need to focus on is if the S&P can make it to that 4100 area that the whole world is focused on (circle on the chart) and if breadth can make it to that spot, as well. If not, there will be a negative divergence with breadth in place. 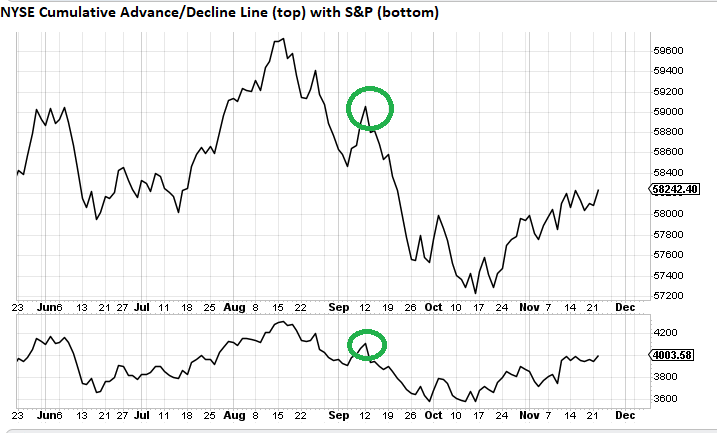 But the McClellan Summation Index continues to rise and until it rolls over I would say breadth is keeping pace.

The New York Stock Exchange's new highs continue to disappoint as the peak reading in early November was 98 and Tuesday's reading was 76. Nasdaq is back to the same 140 new highs, so this will be a big test to see if it can get over that level that has been in place for three weeks now. 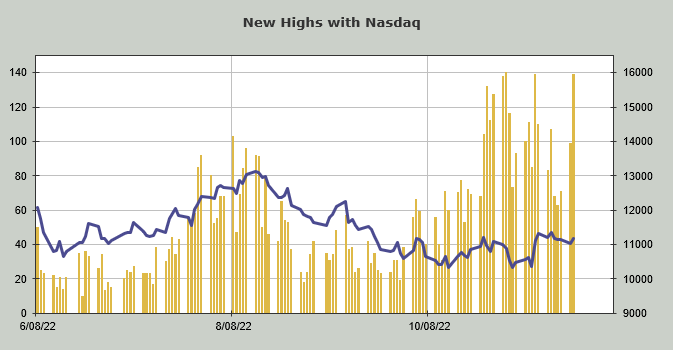 But once again I am focused on the Volatility Index. It fell to just a bit more than 21 on Tuesday. The Daily Sentiment Index (DSI) is now a teenager, as it clocked in at 18. Imagine if we can get another day or so of rallying (into the intermediate-term overbought condition) and the VIX can tumble a bit more, then that DSI is likely to fall into what I would call the "get ready to pay attention" zone.

I want to make one point to all who are looking for an August-type decline. The market is in a different place now than it was then. Then it was two or three months off the low and now we are six months removed from the spring low, so the charts look different. Also recency bias usually doesn't work.

In August it was Apple (AAPL) and Microsoft (MSFT) and mega-cap tech that led us into that high. Now those stocks are barely participating. I do think some of those stocks should rally one more time, if for no other reason than to help lift whatever gloom is still there.

This time around I'm going to focus on what has been hot during this rally that is the Dow, which I discussed in full Monday.

I am going to take Friday off so my next column will be Monday, Nov. 28. Wishing everyone a very happy Thanksgiving!

(AAPL and MSFT are holdings in the Action Alerts PLUS member club . Want to be alerted before AAP buys or sells stocks? Learn more now. )

Now, as big earnings reports drop, the question is whether we'll see a pullback. Here's why.

I'm On the Other Side of the Natural Gas Speculation: Try These 3 ETFs

Natgas is so full of classic bear traps but consider these ETFs based on their individual risk tolerances.

Coeur Mining Is Making a Comeback

Let's take a look at the charts and indicators to see what's attracting investors.