I find it curious that there are people out there who believe the market has been moving based on the second wave -- or continued first wave -- of Covid-19. As Covid cases rose in early to mid-July, the S&P did nothing. I even had someone tell me that the decline in early June was about rising Covid cases. I am not a doctor, nor do I even pretend to be one, but I know cases were not rising in early June when we had that big decline.

So, I think it is disingenuous to say that now that the Sunbelt cases are rolling over -- this is a good thing -- the market can rally. If it didn't go down on the rise in cases, then I am not sure I get the logic that it will go up on a fall in cases. That sort of sounds like someone making up reasons for the market to rally.

What I do see on the chart of the S&P 500 is a market in a trading range since early June. The S&P has rocked back and forth between 3000 and 3200, but for the most part it has not taken the trip back down in July -- when the Covid-19 news got bad again.

There are some folks out there also watching so many obvious levels on the indexes. S&P has that 3200 zone that hasn't been breached in two weeks. The Russell 2000 has 1460 and the Invesco QQQ (QQQ) has that big trend line I keep drawing in that comes in around 250.

But I ask you to take a look at the chart of the 21-day moving average of the put/call ratio for exchange-traded funds, because it is getting awfully low. It should take several more days for it get to the same level it reached in January 2018 and again in February of this year, but it is closing in on it. And when I look at this chart it's hard for me to say folks are scared that there won't be a stimulus package. In fact this chart says they are counting on it. It is priced in already. 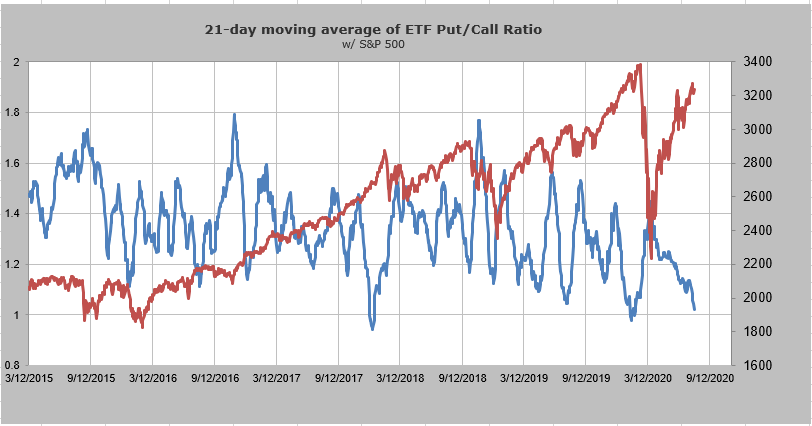 I should point out that if you're looking for this to line up to the day you will be disappointed. It bottomed a few weeks, earlier than the indexes peaked both times. But it's hard to look at that chart and think that anyone is fretting over very much.