With the exception of last Tuesday, the S&P 500 has not had a love affair with Tuesdays since late August. By that I mean Tuesdays have been red. I'm surprised all the folks who think everything is a conspiracy theory aren't talking about this one.

In the meantime, days like Monday are discouraging for the bulls, but days like Monday are what moves the intermediate-term indicators. It's slow going. We all prefer fast moving markets, but when the market hasn't had a proper correction in a year and everyone has gotten used to markets with two-day corrections, this feels so different.

I would prefer the market "get it over with," too, but that's not what the market wants. The Hi-Lo Indicator has inched down some more as it now stands at .31. I view that as "very close to oversold." A reading under .20 is solidly oversold. 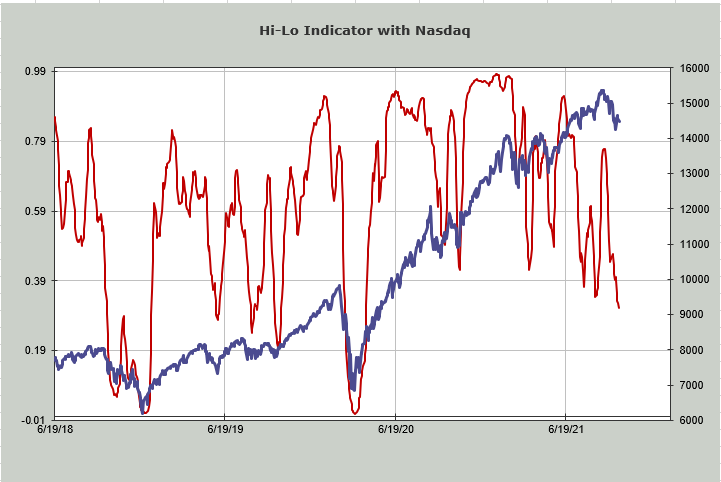 Sticking with the new highs and new lows, it has been more than a month since I have even mentioned the stocks making new highs. That's because they were already lagging tremendously as the S&P was making its high. Recall I complained they couldn't even generate 200 new highs? You can see on the chart there was exactly one day we saw more than 200 new highs and that was one third of what we'd seen in the spring.

Well, I'd like you to squint a bit at the chart of stocks making new 52 week highs, because it has been inching higher. Monday we had the most new highs on the New York Stock Exchange at 153, since early September. Sure they are concentrated in energy and, as you know, I think energy is due for a correction based on the quite high current reading of 93 on the Daily Sentiment Index, but that would be rationalizing an indicator, something I prefer not to do. An increase in new highs occurred on Monday. 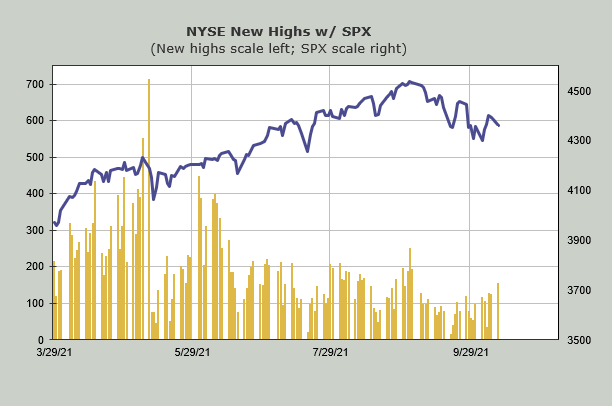 Breadth was also relatively mild on Monday, with net breadth on the NYSE at negative 400 issues. I spent the whole summer complaining about breadth and now I find myself praising it. One caveat: Breadth could suffer if energy and financials pullback, since they currently dominate the positives. But at least on Monday breadth was not bad.

I will admit that Nasdaq breadth was terrible, the worst in a week. But would it surprise you to know that upside volume has been greater than downside volume on Nasdaq for six of the last eight trading days and that includes Monday as a positive reading?

Finally the put/call ratio has had only one reading under .90 in the last 10 days, so the 10 day moving average is now just shy of 1.0. for the first time in more than a year.

The process has been slow. I would liken this market to a leaky tire. You keep pumping it with air and it deflates slowly. A blow out is what traders prefer, so you can just change the tire and get on with it.