The big question about the market now is: "Is Tuesday's advance merely a rally to resistance for the indices that fail or is it the beginning of a recovery?".

From our perspective, the jury is still out.

The charts did manage to register a few positive technical events. However, the majority remain in near-term downtrends while cumulative breadth remains negative. Meanwhile, most of the data still leaves a lot to be desired. 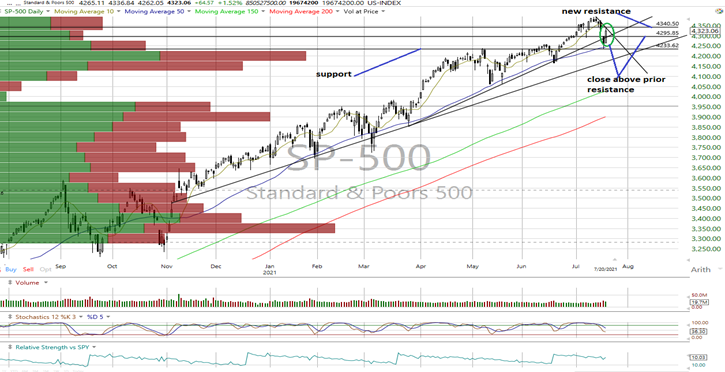 All the major equity indices closed higher Tuesday with positive internals on the NYSE and Nasdaq as all closed at or near their intraday highs.

On the plus side, S&P 500 (see above) did close back above its 50-day moving average but remains in a near term downtrend.

The Nasdaq Composite closed above resistance and downtrend line and is now neutral while the MidCap 400 gave a bullish stochastic crossover signal.

Nonetheless, the trends are little changed with the DJIA, Nasdaq Composite and Nasdaq 100 neutral while the remainder are still in near-term negative trends.

Regarding breadth, while Tuesday's internals were quite positive, they were unable to alter the current downtrends for the cumulative advance/decline lines for the All Exchange, NYSE and Nasdaq.

The Nasdaq's A/D did, however, close back above its 200 DMA.

All the McClellan 1-Day Overbought/Oversold are still somewhat oversold in spite of Tuesday's significant gains and may offer a bit more upside push (All Exchange: -62.29 NYSE: -68.12 Nasdaq: -56.45).

However, the psychology data remains problematic. The Rydex Ratio (contrarian indicator), measuring the action of the leveraged ETF traders, remains bearish and unchanged at 1.2 as they remain leveraged long.

This week's contrarian AAII bear/bull ratio (24.5/41.67) remained in mildly bearish territory while the Investors Intelligence Bear/Bull Ratio (contrary indicator) continued to suggest an excess of bullish expectations on the part of investment advisors at a bearish 15.3/61.2. The lack of fear generated by Monday's slide implies to us too much bullish optimism remains present.

The Open Insider Buy/Sell Ratio remains a neutral 30.4 and still shows a lack of appetite for insiders to buy their own stock.

Tuesday's oversold bounce was quite a relief. However, there was not, as yet, enough of a shift in chart trends, market breadth and data to alter our near-term "neutral/negative" equity outlook. We need a greater sense that we are witnessing something better than rallies to resistance that may fail.

The bulls keep hoping the data will give the Fed a reason to relent, but with no luck so far.

CVS Could Decline Another 20% From Here

Expect further declines for the shares.

One wonders what the reason was for OPEC's hasty decision to cut production now especially at a time when the world is battling inflation.

Here's how to play it.

Will AMD Stock Ever Make a Bottom?