The public markets have largely been kind to companies pursuing multi-billion-dollar valuations on major exchanges in 2019, some more so than others.

For example, Beyond Meat's (BYND) massive gain on Friday amidst a short squeeze and better-than-expected earnings is actually just the tip of the iceberg. The valuation for the company has more than quadrupled since its listing.

However, BYND's triple-digit rise is far from the only major gain on public exchanges, as companies such as PagerDuty (PD) and Zoom Video (ZM) have also soared more than 100% from their initially targeted IPO prices. 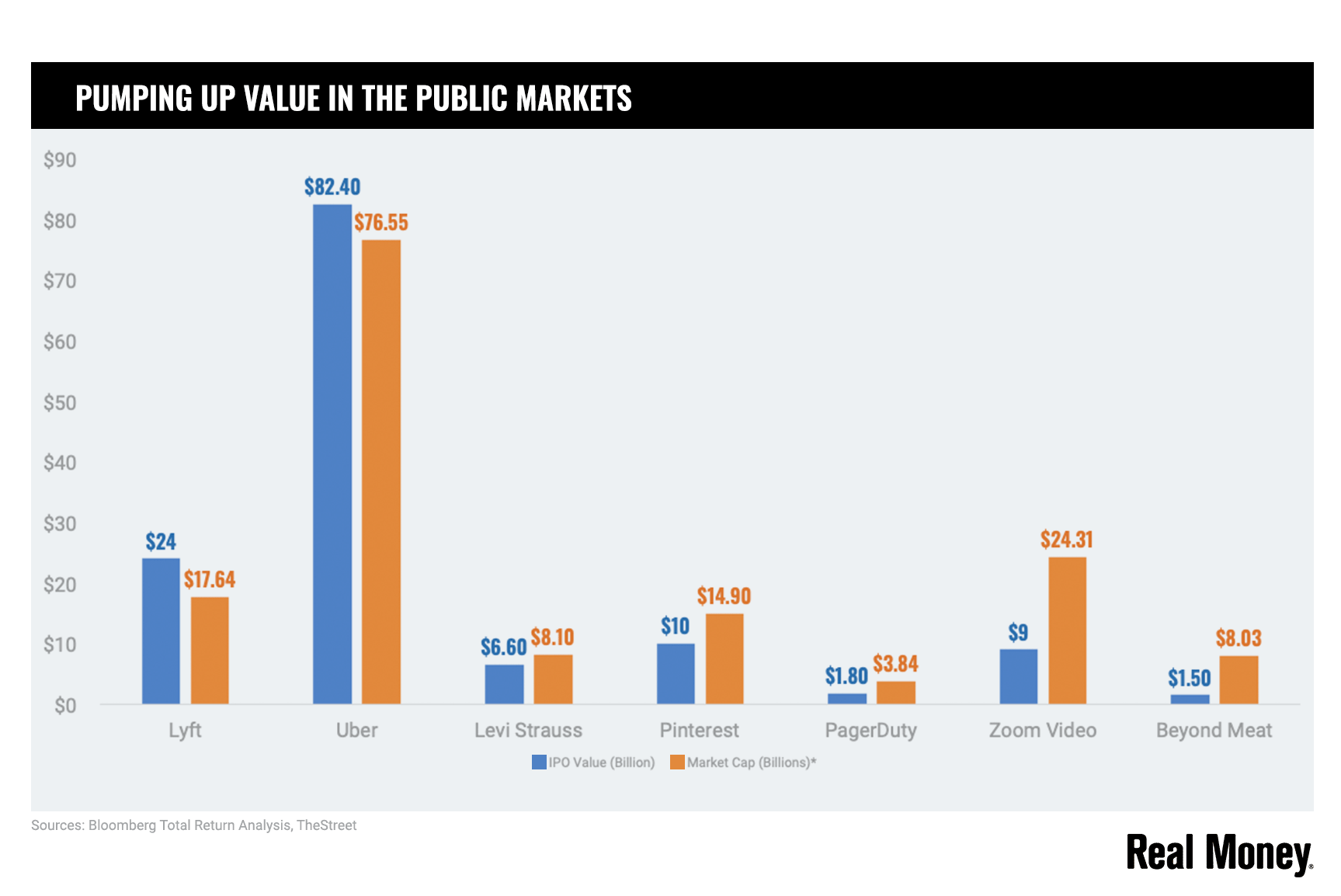 One might reason that Zoom is at least profitable, and actually achieved this status prior to going public while continuing to seize on a massive addressable market. However, that is not the norm among the selected peer group of IPO names this year. 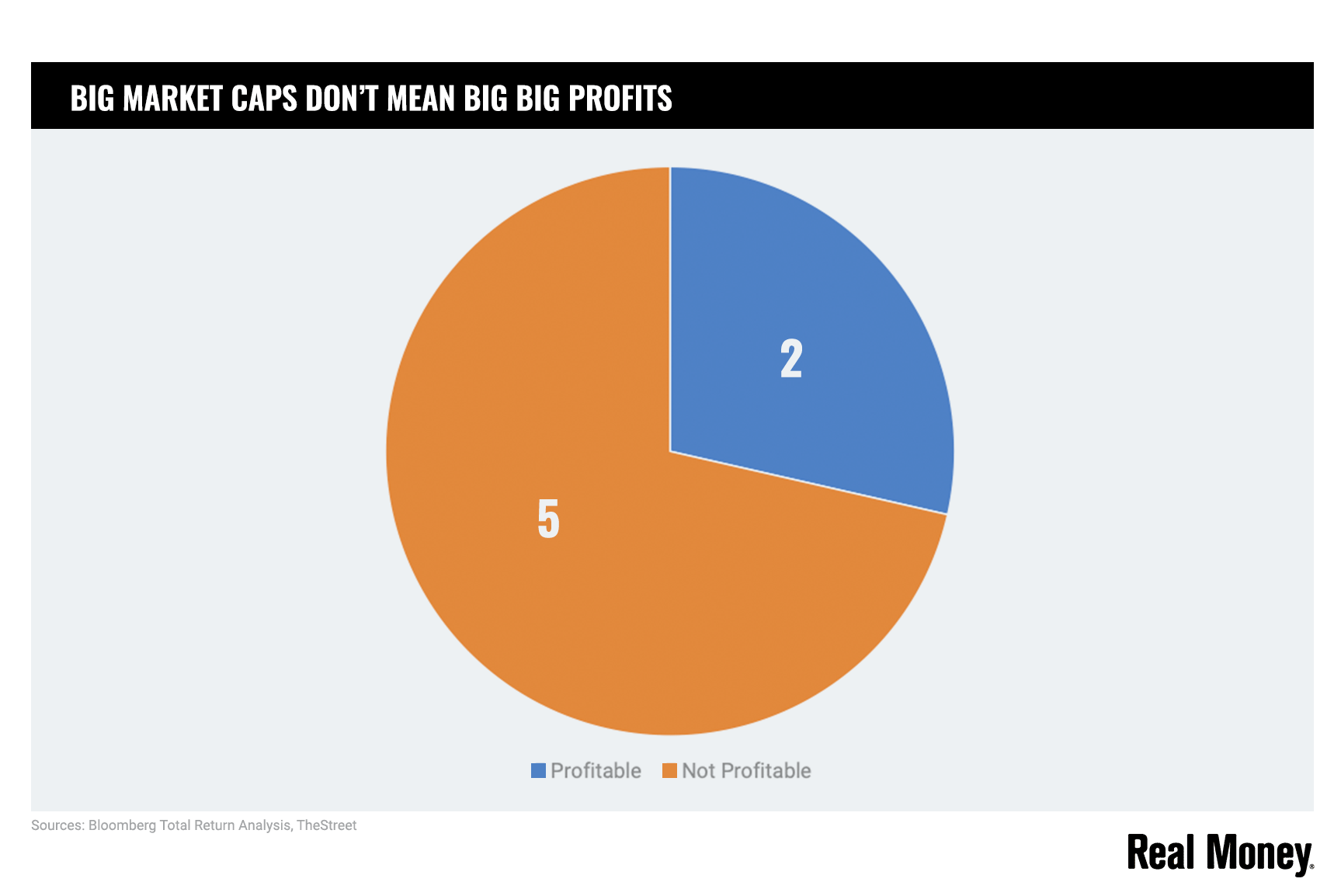 The percentage of loss-making companies listing shares for the first time has reached tech bubble proportions of about 80% of all IPOs. Bernstein: pic.twitter.com/GK9DuPcvUz

Despite the traditional analysis and technical charts failing to justify the price action, these stocks remain exceedingly popular among retail investors on Robin Hood and venture capital firms backing the names like Kleiner Perkins and Renaissance Capital.

"The IPO calendar this year reminds me quite a bit of 1999 where you've got a lot of companies coming public. Many of them have less than stellar operating results but, but maybe great stories in the long-term, we just don't know," Michael Cuggino, President of the Permanent Portfolio Family of Fund told Real Money. "Certainly there's some companies, Lyft (LYFT) and Uber (UBER) being two of them, in a disruptive industry that's growing, but [both are] really questionable as to the operating metrics in the long term."

For more corollaries to 1999, Kleiner Perkins' head of global technology research until late 2018 was Mary Meeker, a former Morgan Stanley managing director widely criticized for bullishly backing many tech stocks that crashed and burned amid irrational expectations. While her picks like eBay (EBAY) , Amazon (AMZN)   and Google (GOOGL) turned out to be overwhelming winners as the dust settled, other picks such as AOL, FreeMarkets, and Yahoo! collapsed in on themselves before either going out of business or being acquired for a pittance compared to their respective IPO heights.

Before departing to kickstart Bond Capital, her newest venture fund, Meeker was noted as instrumental in the company's investments in Airbnb, Uber, Houzz, Slack, and Peloton, all of which are among the most talked about tech IPO prospects in 2019.

Overall, Kleiner Perkins' top holding is now Beyond Meat, according to FactSet, marking its place even more firmly in the non-tech IPO space.

The markets may have acted at least more rationality in the case of ridesharing companies. They were not ready to value Lyft at the premium that its underwriters had hoped for and tempered Uber's run to come in essentially even with its initial IPO list price, which in itself was well below the estimate set ahead of time after underwriters witnessed Lyft's disastrous post-IPO plunge. Still, the unprofitable Uber remains about twice as valuable as Ford Motor Company (F) .

Indeed, as some of the aforementioned names, Airbnb, Slack, Palantir, Peloton, and more, reportedly prepare public offerings, many are beginning to wonder how long the market will tolerate an atmosphere so reminiscent of the tech bubble.

"It looks like people are just assuming some fool will buy in above them," Cuggino said. "What happens when there are no fools left?"

Get an email alert each time I write an article for Real Money. Click the "+Follow" next to my byline to this article.
TAGS: IPOs | Investing | Markets | Stocks | Food & Drink | Software & Services | Technology | Telecommunications | Analyst Actions | Telecom Services | Stock of the Day