Late last week, we focused on two periods in 2008 where the market had dropped significantly and rallied strongly after. The two periods were in the spring of 2008 and late 2008. I had focused on this time because it was the only other period where the equity put/call ratio's 10-day moving average had reached similar heights.

Now, let's explore another period when the market plunged so quickly and had a snap back rally. This time it is the post 9/11. The markets were closed for four days after the terror attack, and when they reopened the following Monday, they plunged. Every single day -- exhausting themselves on that Friday afternoon.

There was a very strong rally in the ensuing eight trading days, about 15%. Then look what happened: a dip, another rally, but mostly the month of October was a big nothingburger.

This time period is a bit different than those of 2008, because in November the market rallied again, about another 10%. But look at those six months after the initial lift off: We stayed in a 10% trading range the entire time. Then we eventually fell out of the range in June, taking us down into the late July low.

The CBOE didn't break out the equity put/call ratio back then; we only had data for the total (and the OEX -- Standard & Poor's 100 index options -- which has long since been forgotten). When we look at the 10-day moving average of the total put/call ratio from post 9/11, we see something similar to what we saw in 2008: a big peak and a move back down.

Friday's action didn't change any of the indicators. But we did finally see the Citi Panic/Euphoria Model push into Panic territory. I consider that a positive. 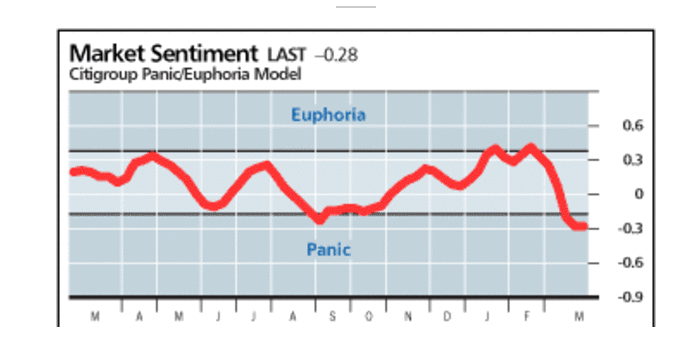 I would remind you that in the fall of 2018 this indicator dipped into Panic in late November and stayed there, heading lower for another month. Keep in mind that it got to Euphoria in mid-January, but the indexes did not top out until mid-February. It's not a perfect timing tool trading-wise, but it is a good sign that it is in Panic now.

My point in sharing these prior periods with you is that when we have fallen as much as we have in such a short period of time, the rebound tends to look "V" shaped, but often that initial burst is the bulk of the rally. We tend to see dips get bought, but the upside is ultimately limited as markets begin to digest and assess what has transpired.

So while I do think dips will lead to another rally, I do not expect we are off to the races. I expect there is still that retest out there. It is still my sense it is too soon for a real retest, as I think many of these extreme indicators still need to work themselves back to neutral positions.