Days like Wednesday, ugly as they are, end up moving my Overbought/Oversold Oscillator closer to a good oversold condition. You see, while the S&P 500 has been red for seven of the last nine trading days, breadth has not been red like that.

The Oscillator is based on breadth and breadth did not turn red until last Tuesday, which means that breadth has been red for only five of the last seven trading days. But that's a far cry from where it was a few days ago.

Sticking with the oversold situation, the McClellan Summation Index, which is still heading down, now needs a net differential of positive 3,500 advancers minus decliners to halt the slide. Once it needs positive 2,000, it has stepped a toe into oversold territory. At positive 4,000, it has gotten oversold. So using this metric, it's oversold and almost at an extreme. 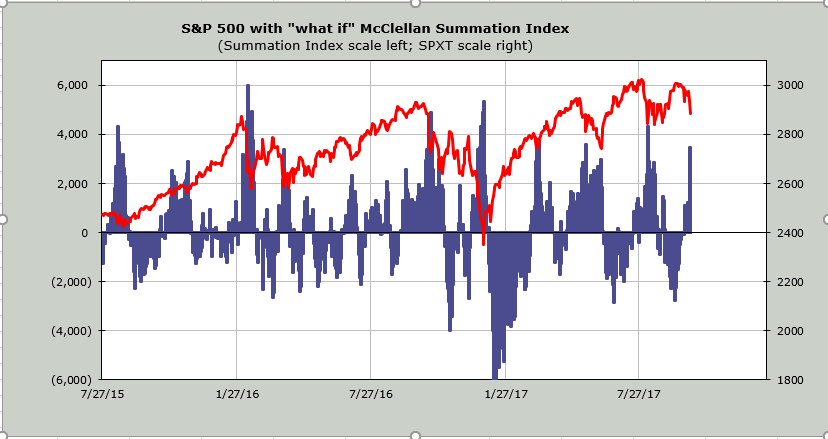 I will also mention that the equity put/call ratio was 84% on Wednesday, which is the first reading over 80% since Aug. 23. We are finally getting some fear into the market from this indicator.

The curious part is that the selling is not terribly panicky. For example, neither Tuesday nor Wednesday saw 90% of the volume on the downside. Wednesday came close at 85% but didn't quite get there. I suppose if we had gotten 90%, the Volatility Index would have been jumpy and it tried, but couldn't quite get there.

But I was asked about the August lows and what the indicators would look like if we got down there, considering we are so close to them now. The S&P was approximately 2840 at the August lows. That's about 50 points from where we are now.

As I have written, the number of stocks making new lows continues to rise, which is bearish for stocks. However, at the August lows there were 307 new lows on the New York Stock Exchange. As of Wednesday, there were 96 new lows. It is possible if we broke the August lows, we'd have a positive divergence in new lows.

Breadth, which as you know has been quite good in September, is still much higher than it was at the August low. It seems to me that if the S&P fell an additional 50 points, breadth is likely to make a higher low.

Nasdaq is a bit more precarious. It is about 100 points higher than its August low and currently has 183 new lows. The number of stocks making new lows in August for Nasdaq was 311, so another 100 points might see an increase and therefore no positive divergence.

I am sure everyone is watching this line on the S&P so if we break it, maybe we get some panic. But I would ask you to notice that the Russell 2000, which started the sell off nearly three weeks ago, was down less than 1% on Wednesday where the big cap indexes were down almost 2%.

My indicators are not lined up for more than a bounce at this point, but at least we're finally seeing some change in sentiment.