Ready to go? Station wagon all packed up. Where are we headed? Somewhere nicer than this. We hope. Either Mom or Dad will drive. They'll probably take turns. We kids in the back will start out reading. When we get bored, we'll ask Mom and Dad if we are almost "there" more time than they will have patience for. Then we'll ask one time too many times. After that we'll probably look out the window, and wonder. Wonder about the people who live in between here and there. Wonder about the lives of the trucker headed the other way, or about the family that just sped by. We don't know. We have no choice but to allow the story of this road trip to unfold.

Thursday starts out as "Flash PMI" day. The numbers across Europe are quite awful. That said, for the most part, the May flash for both manufacturing and services appears to show a slowing in the pace of aggressively collapsing economic activity across the region. Is that good? No. Is it better than terrible? Maybe not even that. Is it better than worst case? After what we now know.. maybe we'll give you that last one. European economies are trying to reopen in stages. That offers the prospect of increased velocity in transaction. If one has been sitting down for months, a walk around the block is seen as quite active.

The state of Connecticut made the move toward getting some businesses open on Wednesday. That makes it unanimous. All 50 U.S. states have now relaxed at least some restrictions, as the economic carnage has become all too real, even to the most scarred among us. Notice, I wrote scarred, not scared. While there are regions in this vast land that think the negative impacts of the coronavirus are perhaps overblown, there are other regions that weep, because it is real to them. Still, some velocity of money is an improvement when that velocity has hovered just above "zero" for two months.

What Day Is It?

Not knowing what day it is has become a common social media meme among those whose jobs have been claimed by the shut-down of entire economies. Then there are those working remotely, who have felt the need to prove their ability to maintain or even increase personal levels of productivity, as they feel the breath of economic despair down their necks. Neither is healthy.

I speak almost daily, as the economy has reopened in small ways, to essential workers who must deal with the public, terrified that one day they bring home an unwelcome extra to their families. I also speak close to daily with a local accountant, who is working harder than ever. Most of this individual's clients are also small businesses. Most of them are unable to pay their bills, unable to pay this individual's bill. Talk about uncertainty.

Still, equity markets rallied -- and rallied quite hard on Wednesday. Gap filled? No. Gap unfilled. The virus is still in charge? Yes, but not just the virus alone. Monday, stocks rallied on positive vaccine news per the Moderna (MRNA) release. Tuesday, stocks sold off per the Stat news article that covered the Moderna release. Wednesday, stocks once again popped: One because economies are starting to move.. a little. Two, because there was once again positive news regarding a developing vaccine candidate.

This time, it was Inovio (INO) . That firm's candidate, INO-4800 has apparently shown a "robust neutralizing antibody and immune system response" in mice and guinea pigs in this fight against Covid-19. I don't know how many Real Money readers also read the piece in Forbes by Nathan Vardi on Pfizer's (PFE) efforts toward rapidly getting to a solution, but the article in my opinion is both a worthy and interesting read. Communities of scientists are working aggressively toward turning this awful page in our history. Markets are ahead of the real economy on this, but are overtly stretched valuations justified? I sure hope so. We all hope so.

The Nasdaq Composite scored more than a 2% increase on Wednesday, closing not too far from the day's highs. This index that, incredibly, closed just 4.7% short of a new all-time high, was led to the upside for the day by... wait for it... Internet names and semiconductor stocks. The rally was broader than that, though. The S&P 500 muddled through a more-pedestrian gain of 1.7% as all 11 sectors managed to shade green. Trading volume increased in aggregate for constituent members of both of these broader large-cap indices, on decisively positive breadth.

These are positives for sure. The Fed Minutes -- always three weeks behind, usually offer little in the way of useful input in a news cycle that evolves not even by the day, but by the minute -- actually reinforced the idea that the central bank stands ready to do monetarily whatever it can to support economic conditions, even in the face of a potential for increased outbreaks of infection.

Investors already knew that Powell had their backs, but it never hurts to hear it again. There is no doubt that what the Fed has done has at least smoothed market function while pressuring borrowing costs. Even as not all of the planned actions have yet to take shape. This is key, as many businesses must replace cash flow with debt out of necessity. That story likely leads the nation toward the path of yield curve control as a method of both policy implementation and forward guidance. Not there yet, but this is out there, even if results have been less than spectacular where such policy had already been in place, pre-public health crisis.

The deterioration of the geopolitical condition between the U.S. and China has only grown in recent days. One can imagine that this relationship might become a campaign issue, unless this issue is one where both sides of the aisle in D.C. actually find common ground. Readers surely noticed the weakness experienced across U.S.-listed Chinese stocks on Wednesday, as the U.S. Senate overwhelmingly passed, in bipartisan fashion, a bill on Wednesday that would force foreign-held corporations listing in the U.S. to meet the same accounting standards that U.S. domiciled corporations are held to. In addition, these firms would be required to certify that they themselves are not "owned or controlled by a foreign government."

Was the Wednesday reaction a bit much? Probably. Prior to delisting, these firms would have three years to get themselves into compliance, and for the most part, these stocks did close off of their lows for the day. Two takeaways here. One, the Trump administration has not yet endorsed this bill, and two, Alibaba Group (BABA) reports on Friday morning. It will be interesting to see if anything is said at that time around these developments.

What that means simply put is that even as economies reopen, the consumer will not be there as before. Businesses may open, at reduced capacity. As long as unheard-of levels of unemployment, underemployment and plain old fear persist, the economy cannot grow beyond a certain point. When this shows up in commercial real estate is probably as soon as that data starts coming in, in some detail.

Hard to miss. The world's two dominant providers of smartphone operating systems, Apple (AAPL) and Alphabet (GOOGL) jointly released their new technology on Wednesday that would, if broadly adopted, notify users if someone that the individual had come into contact with (and also having adopted the technology) had tested positive for this coronavirus. The system would use Bluetooth signals to make this happen.

The big question is just how much privacy individuals are willing to give up in order to gain access to such knowledge. Already, according to the Wall Street Journal, 22 nations and several U.S. states have requested access to this technology, which would be used to augment existing means of tracking and tracing community spread of the virus. This story develops as we move forward.

Facebook (FB) . Always finding a way. Always on the cutting edge of "what's next?" In the past, I have often not been a fan of this firm, but there is no doubt when block-chain-based cryptocurrency was going to be the next big thing, Facebook tried to go there. As Shopify (SHOP) has exploded. As Amazon (AMZN) has become essential, Facebook has noticed.

On Wednesday, the firm announced the launch of "Facebook Shops", an e-commerce platform that will allow businesses, perhaps small businesses, to list offerings across the firm's social media services. Obviously, Wall Street liked the idea. 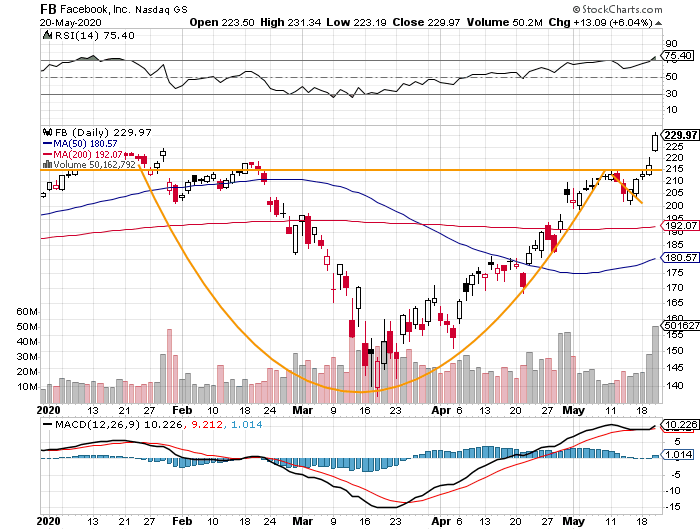 The shares actually broke out from a cup with handle inspired $215 pivot on Tuesday. This was one of those cases, once the news broke, where the pivot acted as a slingshot. The analyst community responded with a series of positive reiterations. Highly rated Lloyd Walmsley of Deutsche Bank sees Facebook Shops as a potential $30 billion opportunity. This morning, the also highly rated John Egbert of Stifel Nicolaus set a $260 price target on the shares.

What do I see? The breakout from a technical perspective certainly sets up the possibility of prices in between $240 and $250. Would I buy the shares today? I'll wait for the profit takers first, but this move and this strength are undeniable.

Get an email alert each time I write an article for Real Money. Click the "+Follow" next to my byline to this article.
TAGS: Earnings | Economy | Indexes | Investing | Markets | Politics | Stocks | Technical Analysis | Trading | U.S. Equity | Coronavirus