You have see the Nasdaq 100? That index of Nasdaq-listed, largest-cap non-financial names now stands above the highs of last October. That's right. Most of our most heavily followed indices are still climbing that mountain. The Dow Industrials (narrow, blue chips), the S&P 500 (aka the market), and the Nasdaq Composite (broad, though tech heavy) are all still closing in. The Russell 2000 (small-caps), and the Dow Transports have a ways to go. The Nasdaq 100, for those who do not eat, drink and sleep this stuff, is a closely followed market barometer, probably because there are no financials, and it is not limited to U.S. corporations.

Energy names ran yesterday on overt headlines. We covered that on Monday. The rest of the market, on what really was a quiet day on low volume, was led by software, and by FANG. FANG, that acronym invented by Jim Cramer several years ago, is emblematic of the original growth names, the "Four Horsemen of the New Economy" at the time, Facebook (FB) , Amazon (AMZN) , Netflix (NFLX) , and Google, now Alphabet (GOOGL) . On Monday, those four stocks enjoyed a renaissance of sorts, and experienced multi-point runs for the session reminiscent of "the old days." FANG led the markets. Netflix led FANG. The horror.

Much to my personal torment, I found personal e-mails from readers. That's not the horror. I love the feedback, love the interaction. I very much encourage that. These folks were not angry. I have dealt with angry, and will deal with it again, as my calls are often made publicly, and public calls such as the short call I had made for NFLX can be misplaced.

I find that some folks who had acted on my original short call on Netflix months ago had been short this whole time -- and are looking for direction. That's the horror. I have mentioned across several platforms that I do not like future prospects for this firm going forward. I have entered short positions in the name several times as well, and covered these positions several times. It would appear to anyone who can read a chart, that the market has decisively disagreed with me on Netflix.

I have both lost and made small money on these shorts. I'm actually net positive on those trades for the year, but nothing worthy of the risk incurred at the time. The key with shorts, especially in high priced, highly volatile names, is to play small ball, so if one is as wrong as I have obviously been on this name, the trader does not get his or her face ripped off. By the way, I do mention it on social media when I cover a position such as this, that had attained a certain level of media attention. Though I still see Netflix as the eventual loser in the streaming space, there is obviously a lot of wood to cut for my original thesis to ever be ballpark close.

Please remember my earliest lessons for retail traders. Every single position needs to have a target price, as well as a panic point. One must act upon reaching either. It is okay to adjust these levels, but only after taking some action, and not regularly. This discipline is imperative to trader survival over the long haul, in particular for those relatively new traders who don't quite understand, or have the type of account that allows for either proper hedging or net basis manipulation through the use of related options.

I would not be a professional trader (nor would be anyone else you follow) if not for the ability to balance or reduce risk in some way. I truly feel awful that there are some readers who got short NFLX with me, and never noticed (or acted) when I acted to cover those positions. Another rule of thumb that really is not a matter of discipline, but more the result of time-worn experience would be to understand what type of monster a stock can be when provoked.

For stocks such as Netflix, or Tesla (TSLA) for that matter, there are true-believers, we in the industry call them the "cult." These folks will always buy the dip in these names. As for Tesla, there is also the matter that just about 25% of the entire float is held in short positions, so there is a fundamental reason for the bizarre support afforded the name over the years. (By the way, that name has now lost about $116 over four months.) This is not the case with Netflix, where the purchasing is much more organic, and given the increased volume over the past week or so that is out of sync with the broader market, indicative of some institutional participation.

One last rule of mine for home-gamers that I think important to remember. Dollar Cost Averaging. There is nothing wrong with this method for accumulation -- when used passively and according to the investor's pre-ordained design. This tactic should never, ever, ever be used in self defense, or especially from the short side in self defense. This is one significant way that retail traders lose control. You think I learned all of these rules from reading a book? I have made all of these mistakes over the decades. Sometimes I had to get hit in the head more than once. Alright. Everyone got that down?

The name reports one week from today, on April 30. The stock trades at 34x forward-looking earnings, and with a PEG ratio of 1.7. Overvalued would be the easy call. Just walk away. Forget it. Well, when you watch defense contractors as I do, it's hard not to notice when one name really gets going. This name is Mercury Systems (MRCY) .

Mercury is not so much an aerospace firm, as a technology firm. But it is most certainly a defense contractor. What it does, in short (very short) is design and build radio frequency and microwave components and subsystems for electronic warfare, as well as signals intelligence requirements and applications.

The firm also offers solutions in mission computing, safety critical avionics and platform management. Why is Mercury different? Besides being mission critical to defense-related cyber security, the firm is also a supplier of technology to the the F-35 fighter aircraft program. That's Lockheed Martin.

Remember, that stock was strong on Monday too. In 2019, four analysts (all at least four-star rated) have opined on MRCY, three buys and one hold. The highest price target among the four? $68. The lowest? $44. The last sale? Again... $70.37. Warriors, we have discovered a hot potato. Something is going on. Volume was much, much heavier yesterday than what is normal for this name. There is real money behind this move. 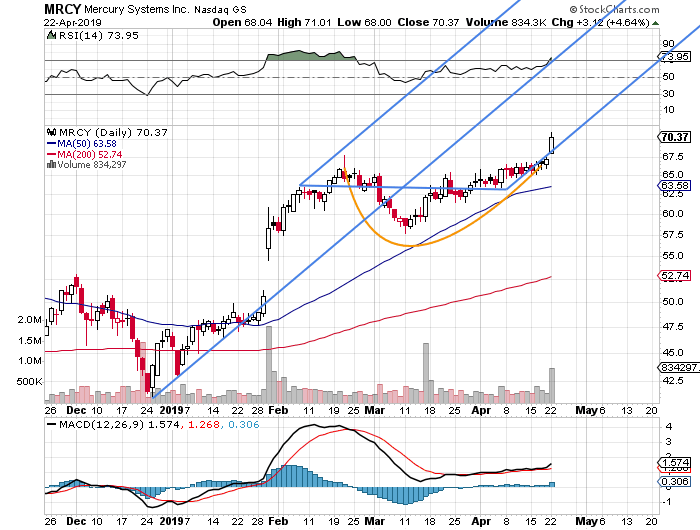 Look at all of this. Relative Strength indicates an "overbought" condition. The daily Moving Average Convergence Divergence has turned decisively positive after a full month of grinding higher slowly. Just take a glance at how far in the dust this stock has left the 5- day, and 200-day simple moving averages. Gee whiz. Now, the name smashes out of the yellow cup formation, while possibly building that blue Pitchfork, which would still be in its early stages. Hmm.

The fundamentals don't seem to be quite there for these valuations. Yet technically, this stock looks like it goes much higher. How important would a supplier to the F-35 program be should North Korea take three steps backward? How important might a leader in defense-related cyber security be in policing a trade deal with China? I'm just supposing. Out loud. I'm also buying some Mercury Systems. Very soon.

Get an email alert each time I write an article for Real Money. Click the "+Follow" next to my byline to this article.
TAGS: Investing | Markets | Stocks | Technical Analysis | Aerospace | Defense | Technology | U.S. Equity