I don't think it has shifted to full-fledged panic, but I think we might call it another giant step away from complacency and moving rapidly toward concern. I have used the Sentiment Cycle chart to show you how markets and the emotions that go along with having money on the line move in cycles.

We get giddy at highs and we despair at lows. After all, who doesn't like to make money? I'm sure I'd be hard pressed to find someone who would say they didn't like making money. But let's talk about statistics.

The Investors Intelligence bulls, which tagged 61.5% four weeks ago in late August are now down 10 points to 51.5%. Keep in mind that this is tallied through last Friday, so if we don't rebound in the next two days, it is likely this will be well into the 40s next week. To put this in perspective -- as you probably know by now -- readings over 60% are red flags for me. Readings in the 40s are a sure sentiment shift, and a reading that falls into the 30s has gone too far toward bearishness. 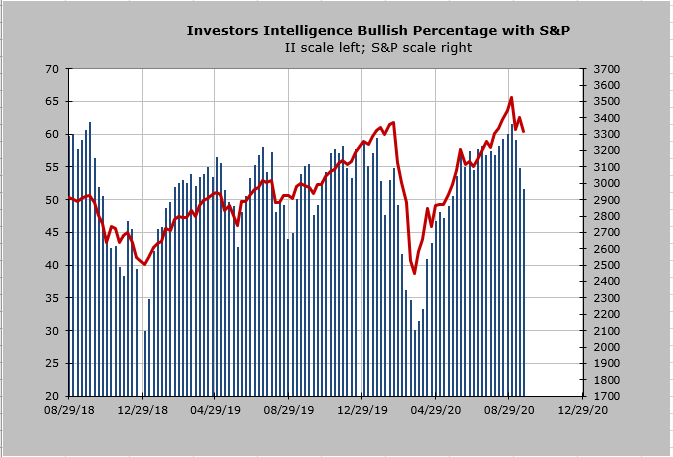 We have not yet seen an equivalent shift in the put/call ratios. For example, since the decline began in September, the put/call ratio has been over 1.0 only two days. Compare that to the spring decline and in late February we were already seeing readings of 1.2 and 1.3 regularly. Some say we're still trying to unwind the massive calls bought in August, but I don't like to rationalize an indicator. For now, the put/call ratios are not showing signs of panic or even much fear. I would categorize them as having eased far off the complacency levels.

When it comes to the statistics and indicators, breadth was awful again, as it has been all week. We didn't quite see 90% of the volume on the downside, but instead it was 89%. Close, but no cigar. With the McClellan Summation Index, however, falling rapidly once again, we find that it will take a net differential of positive 4,200 advancers minus decliners to halt the slide. That means we're short-term oversold.

As we move forward in the days and weeks ahead, I expect we'll see some of the intermediate-term indicators get to oversold readings. The 30-day moving average of the advance/decline line will be oversold late this week and early next week. The Volume Indicator is now at 47%. Readings in the low 40s take this to oversold.

The HiLo Indicator is still at 60%; that doesn't reach an oversold reading until it is under 20%. And new lows are on the rise again. Even Nasdaq couldn't keep them contained anymore as new lows finally expanded beyond the peak reading from two weeks ago. The NYSE has seen its 10-day moving average creeping up toward the May peak reading when the S&P was back at 2800 so there is no divergence there.

I will end with a word about gold, since I have been asked by many. I have not been bullish on gold since the Daily Sentiment Index (DSI) got over 90 back in August. And you might recall that was the same time, or shortly thereafter, that I turned bullish on the dollar.

There is support for GLD around $170-$172. The Daily Sentiment Index is currently 30. If the reading falls under 20, I will think there has been enough of a shift in sentiment and a reading to single digits would get me bullish on gold.