By TIMOTHY COLLINS Aug 18, 2021 | 08:20 PM EDT
Stocks quotes in this article: MUDS
I loved everything about The Topps Company's earnings report Wednesday morning. Unfortunately, I hate everything about the Mudrick Capital Acquisition ( MUDS)  chart, you know, the SPAC merging with Topps.
The one positive takeaway on that is the SPAC is trading near net asset value; however, the business combination vote is due before the Special Meeting on Aug. 25, at 10 a.m. ET. In short, we can't really rely on the NAV to hold up the stock for very long unless the business combination fails to pass.
Sidenote: It would be dumb not to have this one pass as this is one of the top deals we've seen in a year, no pun intended.
It's no secret I've been bullish on this name, primarily for the fundamentals. A few times the chart has looked ready to breakout higher; however, it's essentially failed every time. Right now, we're struggling to hold $10, trapped in a bearish channel, and still can't get above the 21-day simple moving average (SMA) let alone sniff the 50-day simple moving average (SMA). The Full Stochastics are oversold but still falling and the only hope sits in the potential of exhaustion. Normally, I'd say a vote delay could present a buying opportunity, but I'm not sure we'd see the shares dip much below $10 if there are issues with the vote. The good news is a vote approval should pop this to at least $11, if not $11.30. 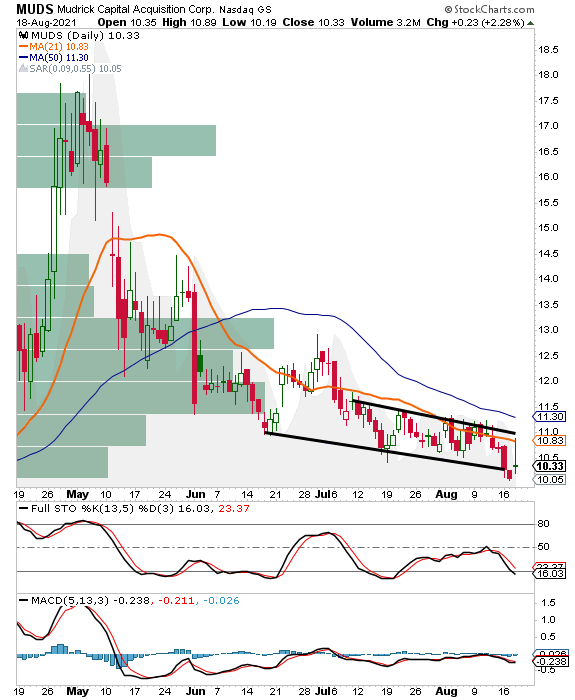 Really, this is a fundamental story. The company just produced strong quarter, two results and guided their full year numbers higher yet again.
During the second quarter, net sales roses 77.7% to $212.2 million with the gross margin adding 350 basis points. Net income hit $36.3 million, an increase of 176.4%. Even adjusted EBITDA rose 144%. The Physical Sports and Entertainment segment of the company accounted for around 71% of the net sales, but it is the digital Sports and Entertainment segment that is carrying the growth. That portion of the business saw sales rise 122.4%. In my opinion, digital is only getting started.
Gift cards at only 28.1% growth drag down the overall number but that's to be expected. Even Confections grew at 58.8%, a strong number and a division that offers diversity to the company and for investors.
Full year revenue numbers were raised $90 million comparing mid-point to mid-point, moving from $750 million to $840 million. Those numbers trickle down to an increase of $25 million in the company's adjusted EBITDA. Unlike so many other SPAC-related names, Topps is outperforming and raising numbers.
While MLB TOPPS NFTs have begun trading as well as Bazooka NFTs, Topps recently rolled out the Bundesliga 2020-2021 Season Celebration NFT collection. Although these haven't sold out yet, Topps has sold 7,769 packs at $85 each and 9,002 packs at $10. Rounding that to the nearest whole number, that's roughly $750,000 in the first week. I expect we'll see some evolution in the existing NFT collection plus newer ones being introduced as the company adapts and analyzes the market as to what's working best.
This continues to be a name I'll own until fundamentally I find a reason not to own it.
Get an email alert each time I write an article for Real Money. Click the "+Follow" next to my byline to this article.
TAGS: Investing | Options | Stocks

The charts and indicators of the operator of a cloud-based artificial intelligence lending platform are largely bearish.