There seems to be a common theme permeating the market these days. Everyone wants a flush. I call it panic. Call it what you want, but that's what folks are seemingly waiting for.

But can we get a proper bout of panic or a proper flush when we are still in an either/or market? It is my view that panic comes when everything goes down together.

Let's begin by discussing energy. Tuesday I wrote how the Energy Select Sector SPDR Fund (XLE) was at or near a target, and there is also a trendline that comes in around here. In the last two days XLE, an exchange-traded fund to be long energy stocks, has pushed itself just barely up and over the line.

But today we find that the Daily Sentiment Index (DSI) for crude oil is at 92. The DSI for heating oil is also at 92. And if that wasn't enough, the DSI for gasoline is at 91. Some might call that a trifecta. I call it too much bullish sentiment for anything energy related.

It is my experience that once the DSI gets up over 90 the runway is quite short for the underlying instrument. It is a daily reading so a few down days could reset it, but no matter how we look at it, I think energy needs a pullback.

This of course, being the either/or market, means that if energy comes down -- as financials already have -- will technology get a lift? Surely, if it doesn't get a lift and energy joins the downside, then we could get a flush. In the meantime, the DSI for Nasdaq is at 40. It was last this low in May, when you may recall every single person hated tech stocks (it was actually 39 then). While not at an extreme (under 20 would be an extreme reading) it certainly shows a change in sentiment from early November.

In early November, I put out a special short report noting that the DSI for Nasdaq and the S&P had crossed over 90.

Nasdaq saw an increase in the number of stocks making new lows as it chimed in at 818 on Tuesday. That means there was no positive divergence since there were more new lows this week than there were a week ago when there were 740 new lows. Remember, you want to see fewer new lows, because it tells us the selling is drying up. More means it's still going on. 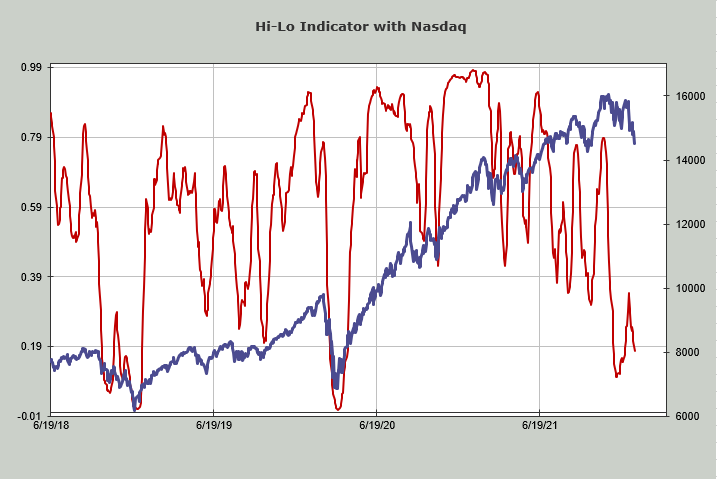 Let me end by noting that the DSI on bonds is down to 31. The parameters for the DSI on bonds tends to be once it falls under 20 we've gotten extreme. Only once have I seen it go to single digits. I would say that means we are finally on watch that rates could reverse, especially if the DSI goes much lower.

The bottom line is that Tuesday's market didn't change much, the trend remains the same. But markets rarely go up or down in a straight line, so let's not be surprised if we see Nasdaq rally some, especially since it is back to an oversold condition.