Palmer said they've seen a lot of changes over the past 20 weeks at Taylor Morrison. What started as a slow trickle has now become a growing trend of urban consumers looking for more space for home offices, aging parents, and a better lifestyle. She said enhanced technology is allowing people to work from anywhere and consumers are leaving dense urban areas.

Taylor Morrison has seen a 94% increase in sales over last year.

Let's check out the charts to see what's in store for TMHC, which was upgraded by TheStreet's Quant Ratings service on Friday.

In the daily bar chart of TMHC, below, we can see that the shares were cut down sharply from February to the middle of March. Prices bounced up in late March and then made a fast retest of the March nadir in early April before a strong rally got underway. TMHC is trading above the rising 50-day moving average line and above the bottoming 200-day moving average line. We should be witnessing any day now a bullish golden cross of these two lagging indicators.

The trading volume increased in March as prices dove and rebounded but the trading volume has diminished since the price low, The On-Balance-Volume (OBV) line has been rising since early April and tells us that buyers have been more aggressive even with declining volume.

The Moving Average Convergence Divergence (MACD) oscillator is above the zero line in positive territory but poised to cross to the downside for a take profits sell signal.

In the weekly bar chart of TMHC, below, we went back five years to show how the shares have been unable to break out over the $28 area. Prices are above the declining 40-week moving average line.

Trading volume has been more active in the past few months than it has been in the past five years. The weekly OBV line did not break to a new low in February and March and suggests that investors in TMHC held onto their long positions.

The trend-following MACD oscillator is ready to cross above the zero line for an outright buy signal on this longer time frame.

In this weekly Point and Figure chart of TMHC, below, we used close-only price data. Here the software is projecting a possible price target in the $46 area. A weekly close at $29 or higher will be a breakout. 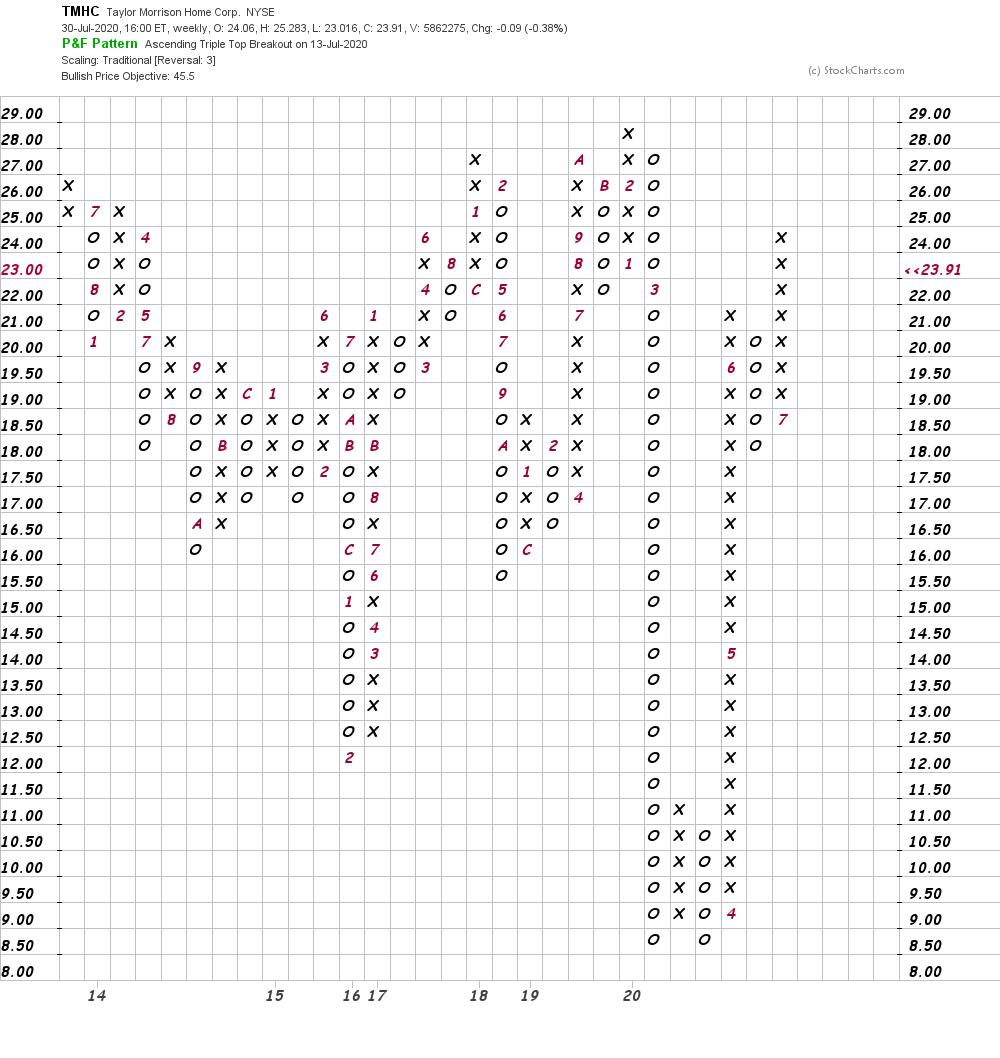 Bottom-line strategy: Charts and indicators for TMHC are constructive. I want to see a strong weekly close above $28 on increased volume before going long. The $46 area will be the price objective. Risk a close below $23 after buying the breakout.

Get an email alert each time I write an article for Real Money. Click the "+Follow" next to my byline to this article.
TAGS: Investing | Stocks | Technical Analysis | Construction & Engineering