Butterfield admitted that after six years, it's still a little difficult to explain Slack to those who are not familiar with the platform. He said Slack moves company messaging out of the inbox and into channels where everyone can go to collaborate and catch up with what's going on.

That customer loyalty and enthusiasm has propelled Slack through several years of viral growth, Butterfield added, but now the company is facing new competition from Microsoft (MSFT) and its collaboration offering, Teams.

Let's investigate the charts and technical indicators of WORK.

In the daily bar chart of WORK, below, we can see that prices have been in a downtrend from early June when prices gapped lower. WORK is trading right at the declining 50-day moving average line and "for now" just above the rising 200-day moving average line. I use the phrase "for now" because prices gapped to the downside again in early September.

The On-Balance-Volume (OBV) line shows a decline from early June and a flat trend the past two months telling me that buyers are not being aggressive. The trend-following Moving Average Convergence Divergence (MACD) oscillator shows cover shorts buy signals in August and September but that is not an outright go long signal, unfortunately.

In the weekly bar chart of WORK, below, we can only see the past 12 months of trading instead of our typical three years of data. The shares are trading right on the cresting 40-week moving average line.
The weekly OBV line shows a downtrend from the middle of May telling us that sellers turned aggressive ahead of the price peak in early June. The weak OBV line suggests that the price recovery in September is not likely to last long. The MACD oscillator shows weakness.

In this daily Point and Figure chart of WORK, below, we can see the potential for a rally to the $31 area. 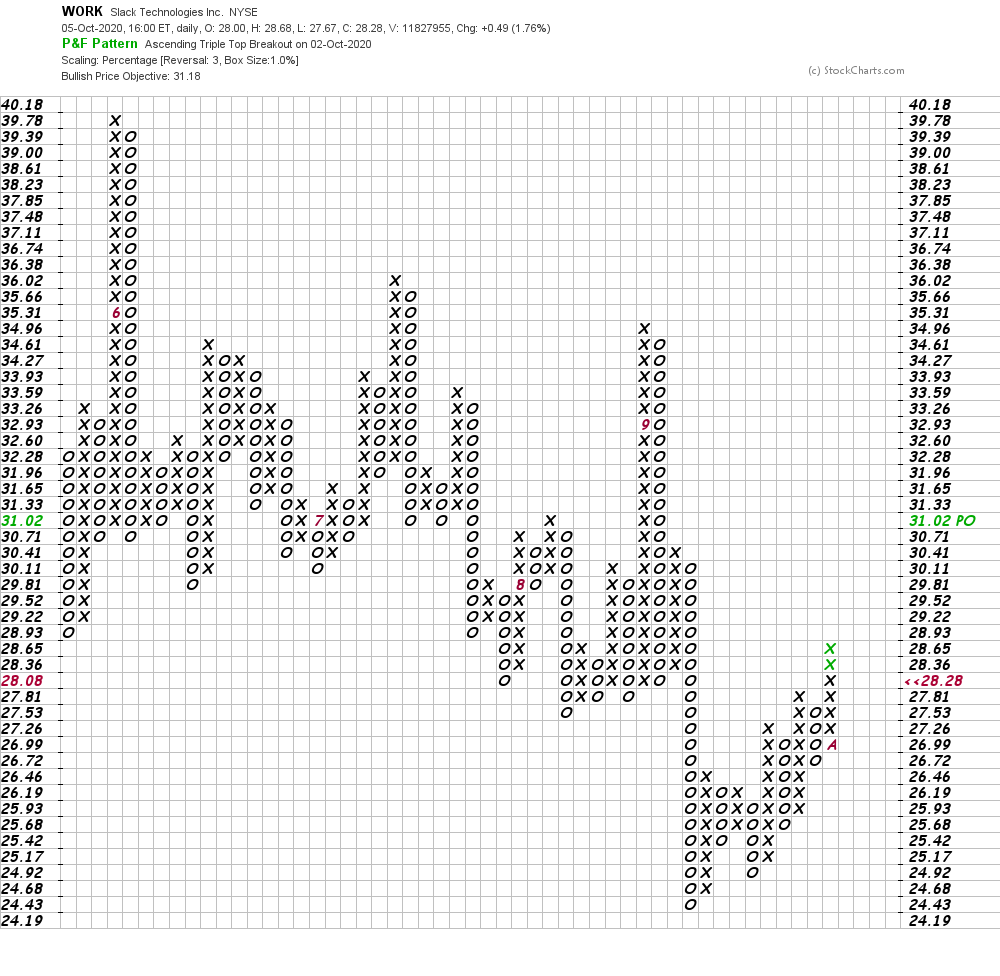 In this weekly close-only Point and Figure chart of WORK, below, we can see a potential downside price target in the $24 area.

Bottom-line strategy: The decline in the OBV line and prices since early June does not appear over yet. Prices could trade up to the $31 area based on the Point and Figure chart but without signs of aggressive buying. I would avoid the long side of WORK for now.
Get an email alert each time I write an article for Real Money. Click the "+Follow" next to my byline to this article.
TAGS: Investing | Stocks | Technical Analysis | Software & Services | Mad Money | Executive Interview