Jim Cramer fields questions on stocks that callers offer up during the Mad Money Lightning Round segment. On Tuesday evening  one caller asked about Scotts Miracle-Gro (SMG) . "The summer is almost over, so I'd take the money and run," responded Cramer.

Let's check out the charts of SMG.
In the daily bar chart of SMG, below, we can see that the shares have performed strongly from the March low. Prices have more than doubled in just five months. SMG is trading above the rising 50-day moving average line and is trading above the rising 200-day moving average line. Judging by the past 12 months of activity it looks like SMG is extended versus the 200-day line.
The On-Balance-Volume (OBV) line has moved sideways since June and thus it has diverged from the price action which has been making new highs. This is a bearish divergence and can be a warning sign of a rally's late stage.
The 12-day price momentum study in the lower panel shows lower highs from April into August, which is another bearish divergence but its size makes it more troubling. The longer a divergence goes on the more significant it becomes and the more we should pay attention. The pace of the rally has been slowing since April and that should worry recent longs.

In the weekly bar chart of SMG, below, we can see a mixed picture. Prices are still in an uptrend and above the rising 40-week moving average. The weekly OBV line has been moving sideways since February even though prices have moved up to new highs. This is a bearish divergence.
In the lower panel is the 12-week price momentum study, which shows that momentum has weakened from June to August. The warning flag is out.

In this daily Point and Figure chart of SMG, below, we can see that the shares have reached and exceed a price target of $158. The chart is not projecting a downside price target but this can mean that technically oriented traders may be taking profits. 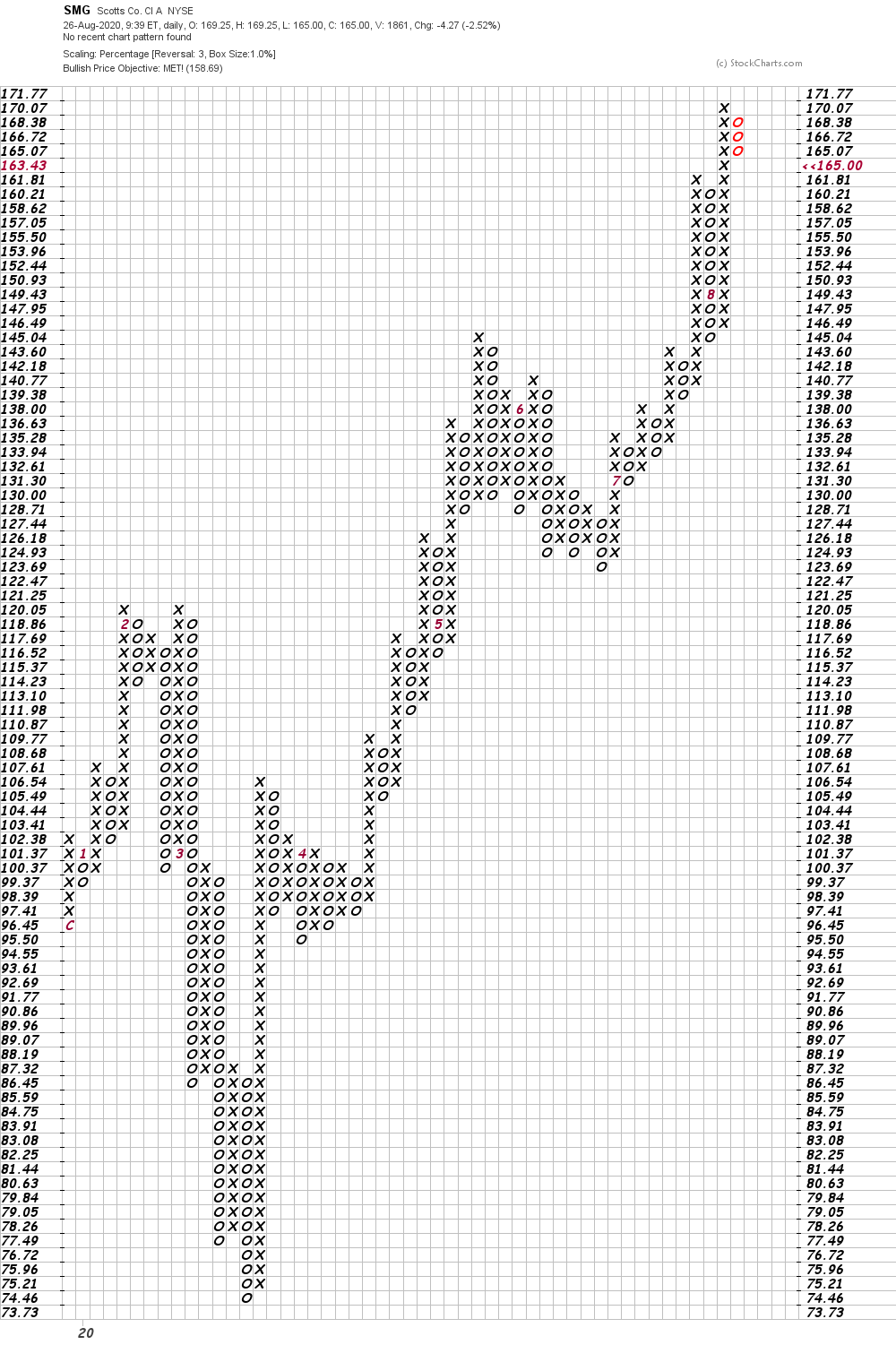 Bottom-line strategy: With a number of bearish divergences showing on the daily and weekly charts this could be a good time to book profits on long positions.
Get an email alert each time I write an article for Real Money. Click the "+Follow" next to my byline to this article.
TAGS: Investing | Stocks | Technical Analysis | Agriculture | Mad Money

Jim Cramer: The Tale of My Apple Watch

I keep saying own Apple, don't trade it. If not? I can't help you.