In his first "Executive Decision" segment of Mad Money Monday night from the West Coast, our own Jim Cramer sat down with Dr. Vas Narasimhan, CEO of Novartis AG (NVS) . Novartis is one of the companies leading in innovation in medicines and cutting-edge drugs. Narasimhan said the company makes consistent investments into research and development every year. There are 26 drugs currently in the company's pipeline.

Innovation involves making long-term bets on completely new types of treatments, he added, which is why you're seeing Novartis moving into areas such as gene therapies that can offer patients cures instead of prolonged treatments. That's also why Novartis is spinning off its eye care business, Alcon, in order to focus on its drug pipeline which includes a drug for migraines. Novartis also has drugs on the horizon to treat arthritis and even heart failure. Targeted cancer treatments with all-new delivery techniques to ensure the latest drugs reach their intended destinations are also in the pipeline.

Sounds promising but let's take a look at the charts and indicators to round out the analysis.

In the daily bar chart of NVS, below, we can see an interesting pattern to the price movement the past 12 months. Prices declined from late January to late June and staged a recovery into early December. The price strength in October and November is interesting in that the broad market was weak and the level of trading volume for NVS was heavier than what was seen in prior months.

Prices outperformed on a relative basis and on strong volume -- a sign that investors moved money into NVS (and maybe out of things like technology). In December sellers of NVS became a little more aggressive and prices declined to retest the flat to slightly rising 200-day moving average line from above. NVS rebounded into the new year and is now only a few dollars below the declining 50-day moving average line.

The daily On-Balance-Volume (OBV) line shows an overall positive pattern, in my opinion. In the first half of 2018 when prices declined about $20 the OBV line only weakened slightly from April to June. From late June the OBV line has improved and the low in December is higher than the low in October. This may be a subtle improvement but I think it is bullish clue that many traders probably are missing.

In the bottom panel is the Moving Average Convergence Divergence (MACD) oscillator, which very recently crossed to the upside from below the zero line. This crossover is considered a cover shorts buy signal or a buy when the stock is still in a downtrend.

In the weekly bar chart of NVS, below, we can see a mostly positive alignment of the indicators. Even with the decline in December the prices of NVS are still above the rising 40-week moving average line.

The weekly OBV line made a low in June and has risen since suggesting several months of accumulation. The weekly MACD oscillator has been above the zero line since late August and is poised to turn up to a fresh outright go long signal in the weeks ahead.

In this Point and Figure chart of NVS, below, we can see an uptrend from late 2016 and we can see a downside price target or objective of $72.83. A new low for the move down at $81.44 would be bearish, should it happen and that may precipitate further losses but I doubt if prices will sink as low as the $72 area. 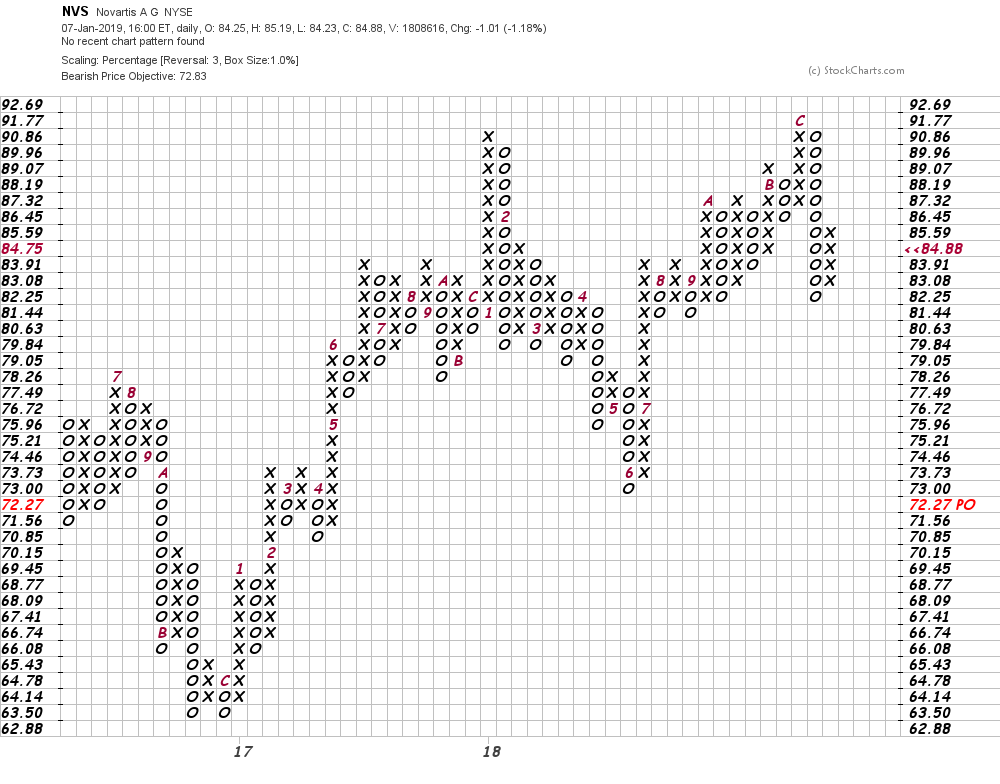 Bottom-line strategy: I am very impressed in how NVS has performed in the past three months. While the "sky was falling" for many extended technology names, NVS was a "rock." Traders and investors could probe the long side of NVS at current levels and on strength above the 50-day moving average line. Risk a close below $81 while looking for another leg higher. The $100 area is my price target.

Get an email alert each time I write an article for Real Money. Click the "+Follow" next to my byline to this article.
TAGS: Investing | Stocks | Technical Analysis | Health Care Equipment & Services | Healthcare | Pharmaceuticals | Mad Money

NeoGenomics Is Ready to Turn Higher

My Favorite Day of the Month: Options Expiration Day

I have become a huge devotee of this simple option strategy. Here are two recent examples from this week.

The 'organic' economy has to take over at some point, and at that point, at least in theory, demand for credit should accelerate.