Van De Put said consumers want comfort and they're turning to trusted brands like Oreo and Ritz. Snacking has been trending higher since the pandemic began and Van De Put said that trend is likely here to stay as a percentage of consumers will stay at home.

When asked about the state of the world economy, Van De Put explained that China is starting to come back, but India and Southeast Asia remain in strict lock downs. Things are trending toward recovery in both the U.S. and Europe, but Latin America is still seeing cases rise and will likely be the slowest region to recover.

Let's check out the state of the charts and indicators.

In the daily bar chart of MDLZ, below, we can see that prices declined with the broader market from February to the middle of March. MDLZ made about a two-thirds recovery rally that put prices at key resistance (prior support) in the $54 area by the middle of April.

Trading volume was heavy from late February through March but has tailed off. The On-Balance-Volume (OBV) line declined sharply into early April and has since drifted lower. A declining OBV line is a sign of aggressive selling and is not the pattern that bullish traders want to see.

The Moving Average Convergence Divergence (MACD) oscillator got above the zero line for a couple of weeks but is now back below it.

In the weekly bar chart of MDLZ, below, we can see a less-than-positive picture. Prices are below the declining 40-week moving average line.

The weekly OBV line is pointed down and the MACD oscillator is below the zero line and not close to signaling a cover shorts signal.

In this daily Point and Figure chart of MDLZ, below, we can see a nearby downside price target of $48. That is not all that far away but that does not mean that buyers will appear at that level. The downward direction is more important right now. 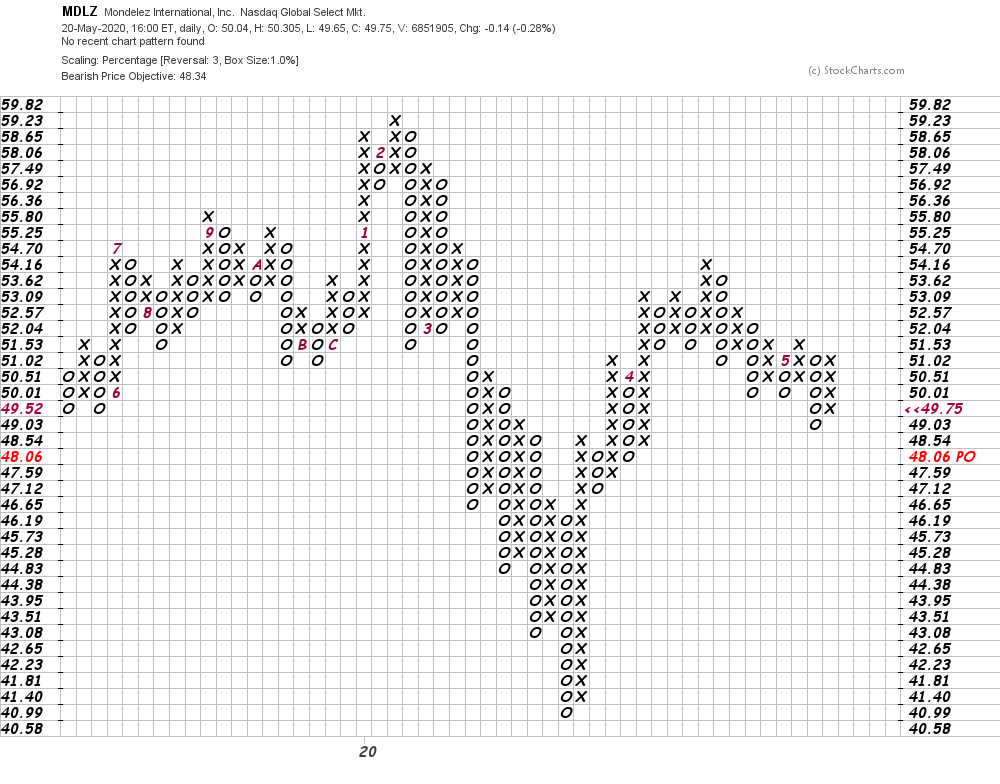 Bottom-line strategy: Some people may be grabbing more cookies and snacks when they make a trip to the supermarket but the stock market is suggesting this is a passing phenomenon. Avoid the long side of MDLZ for now.

Get an email alert each time I write an article for Real Money. Click the "+Follow" next to my byline to this article.
TAGS: Investing | Stocks | Technical Analysis | Food & Staples Retail | Retail | Mad Money | Executive Interview