CRISPR Therapeutics AG (CRSP) is a gene editing company focused on developing transformative gene-based medicines for serious diseases. That sounds amazing but it is also a stock with some bullish charts. Let's check them out.

In the daily bar chart of CRSP, below, we can see that prices peaked in December and declined into a mid-March low with the movement of the broader market. It did not take long for CRSP to recoup its losses and rally to new highs. Prices are above the rising 50-day moving average line and the rising 200-day moving average line. We can see a bullish golden cross of these two averages back at the end of May/beginning of June.
The On-Balance-Volume (OBV) line shows a decline into a March low followed by a recovery to early July. Prices have been trading sideways since early July and the OBV line has moved sideways to lower telling us that there has been some profit-taking as prices have corrected their gains from March.
The Moving Average Convergence Divergence (MACD) oscillator has corrected lower since early July but the two moving averages that comprise this indicator have begun to narrow ahead of a potential new buy signal.

In the weekly bar chart of CRSP, below, we can see a large sideways consolidation pattern between $25 and $75 going back to early 2018. This consolidation pattern can support a major rally. If we take the height of the pattern ($50) and add it to the breakout at $75 we get a potential target of $125. Prices are above the rising 40-week moving average line.
The weekly OBV line has been strong and rising since late 2018. The weekly MACD oscillator is still bullish but showing some narrowing, which implies some tapering off of the strength of the trend.

In this Point and Figure chart of CRSP, below, we used daily price data. Prices have formed a triangle-like pattern and look ready for an upside breakout. The software is projecting a target of $101 at this time. 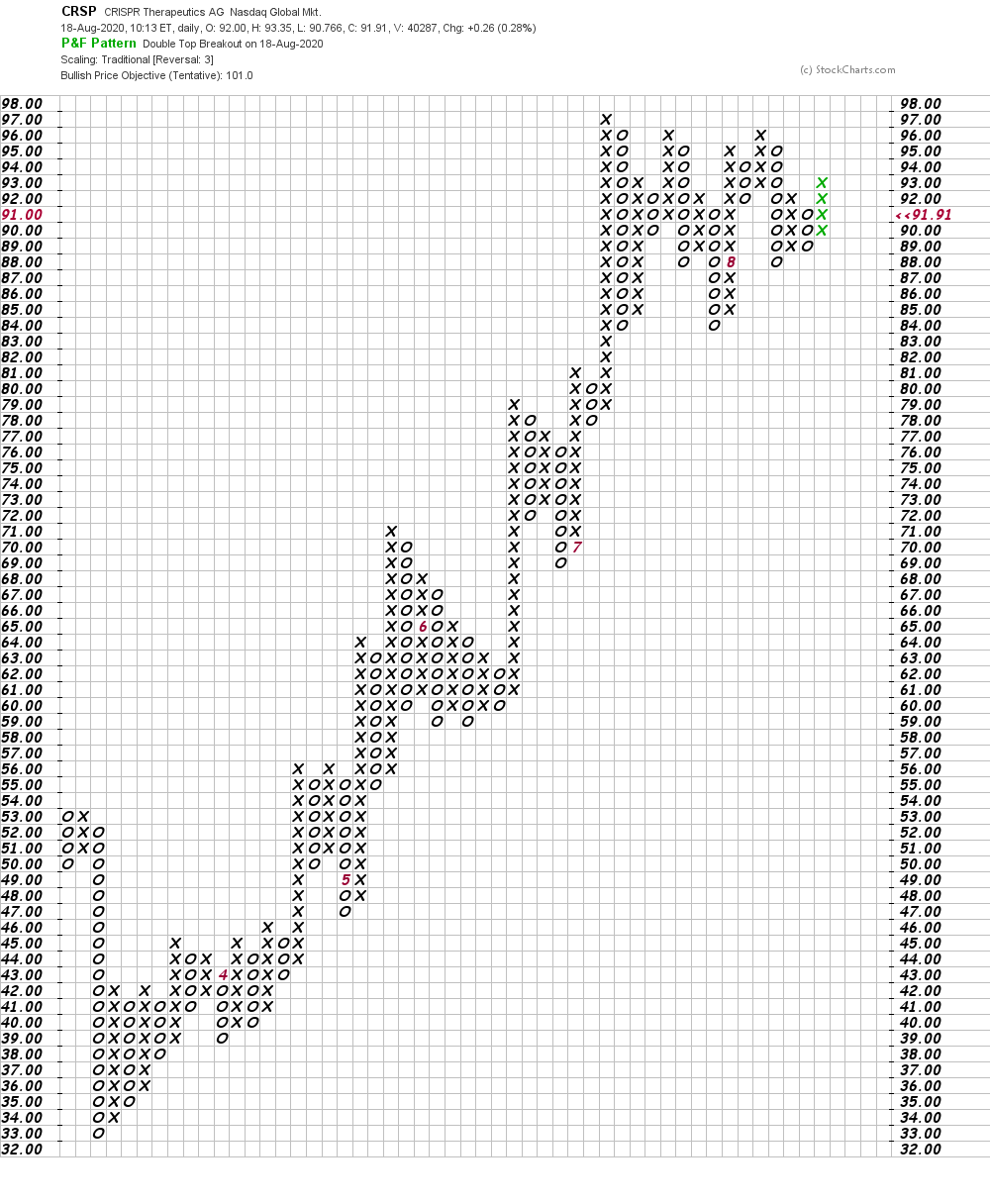 Bottom-line strategy: Aggressive traders could approach the long side of CRSP at current levels risking a close below $84 for now. The $101 area is our first upside price target with the $125 area then next objective derived from the height of the consolidation on the weekly chart.
Get an email alert each time I write an article for Real Money. Click the "+Follow" next to my byline to this article.
TAGS: Investing | Stocks | Technical Analysis | Biotechnology