Box Inc. (BOX) is scheduled to report its first-quarter earnings results Monday after the close. During Jim Cramer's Mad Money program Friday night he said this company has a cloudy growth path. The consensus estimate is for a loss of $0.05 per share (+28.6% Y/Y) and revenue of $161.46 million (+14.9% Y/Y).

Let's see what the charts and indicators are up to Monday morning.

In the daily bar chart of BOX, below, we can see prices moving from the upper left of the chart to the lower right of the chart. A bounce from late December stopped abruptly at the end of February with prices gapping sharply lower on heavy turnover or volume. BOX gapped below the declining 200-day average line and the still rising 50-day line -- both averages have negative or bearish slopes now.

The daily On-Balance-Volume (OBV) line shows a rise from early March but looks like it is turning lower again. A declining OBV line is a signal that traders are being more aggressive on the sell side. The trend-following Moving Average Convergence Divergence (MACD) oscillator crossed below the zero line in May for a fresh outright sell signal.

In the weekly bar chart of BOX, below, we can see that prices have spent several months below the declining 40-week moving average line. There is some support in the $18-$16 area but not a lot and with the weekly OBV line in a decline from last May it would not be too big of a surprise to see prices test and maybe break the lows of November and December.

The weekly MACD oscillator is below the zero line and looks like it is turning down for a fresh outright sell signal.

In this Point and Figure chart of BOX, below, we can see that prices made a new low for the move down with the trade at $18.31. So far the software has not projected a downside price target. 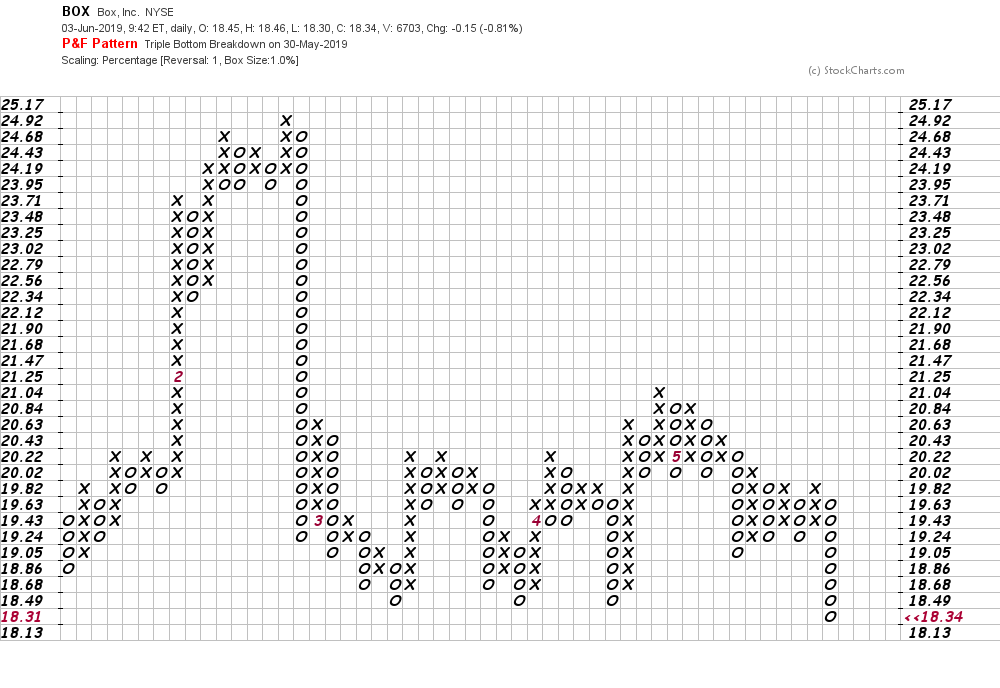 Get an email alert each time I write an article for Real Money. Click the "+Follow" next to my byline to this article.
TAGS: Earnings | Investing | Stocks | Technical Analysis | Software & Services | Mad Money

A Big Picture Look at Tech Stocks and Treasuries

Trends spanning over several months can be thwarted by a trend that spans over years.