Can you feel it? You know, the change in sentiment that has been so elusive. It started on Wednesday. It's small, but it's there, at least the inklings of it are now there.

Let's begin with the put/call ratio. No, it didn't sink like a stone, unless you call a reading of .90 low. It is only low if you consider that it is the lowest reading since it was .88 on July 15. But it's a small shift and one we haven't seen since the middle of July.

Then there is the Investors Intelligence survey. The week-to-week change isn't the story, as bulls climbed by 3, while the bears fell by 3. It is that the bulls are now at 41.1%. This up from 26% in mid-June, but more so, it is the highest reading for bulls since mid-January. 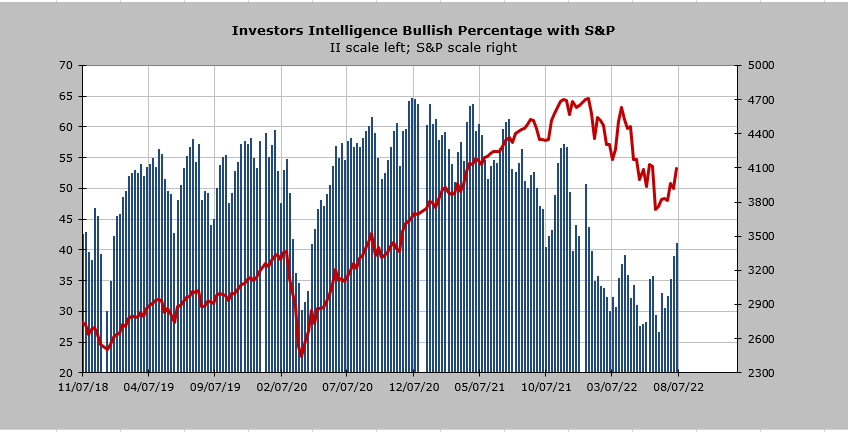 Bears are now at 30.1%, which is down from 44% in mid-June. They are now the lowest since early February. So, this is the shift I refer to, the one where folks are now the most bullish all year.

Let me note neither of these readings is extreme, but the shift is on. Finally. Those bears have now done more than mosey over to the fence to check out what's on the other side. They have jumped the fence and are now enjoying cocktails with those who were so lonely on the bull side of the fence as we headed into summer.

The other change is more anecdotal on my part. It's that the index-moving stocks were hot, such as Apple (AAPL) . If you want fast exposure to the market, you are looking to a stock like Apple. That's the way it goes, and that is where so much money went on Wednesday. But it also shows the change in sentiment.

That doesn't mean breadth was poor; it wasn't. It wasn't great, though. Last Thursday, the S&P tacked on 48 points (vs. Wednesday's 64 points) and net breadth last week was positive 1,700, while Wednesday it was positive 1,270.

The number of stocks making new highs has fallen away this week, as well. Last week the New York Stock Exchange saw 44 new highs and Wednesday saw 25. Even Nasdaq, where all the action is, had 92 new highs last week and a mere 55 on Wednesday.

Finally the Volatility Index did not make a lower low on Wednesday vs. last week. The Daily Sentiment Index (DSI) sits at 20, so I await its fall to a lower reading.

(AAPL is a holding in the Action Alerts PLUS member club . Want to be alerted before AAP buys or sells stocks? Learn more now. )
Get an email alert each time I write an article for Real Money. Click the "+Follow" next to my byline to this article.
TAGS: Investing | Stocks | Technical Analysis |