So we have gotten our rally into early April. Will it continue?

I think it has a bit more to go, but let's take a look at the indicators and where they stand.

My own Overbought/Oversold Oscillator will be back to overbought late this week. Typically, that means we'd get a down day early in the week and one more push up before the week is out. The New York Stock Exchange's Oscillator is over the zero-line, but Nasdaq's is not yet there. Keep in mind this is based on breadth. Good breadth surges the Oscillator while poor breadth keeps it lethargic.

I think it is still too early to perform the exercise for the Nasdaq Momentum Indicator and when it will get overbought, but suffice it to say it seems it won't be before the end of the week either.

Even the 30-day moving average of the advance/decline line will not be overbought until mid-April.

So what's the problem you ask? Let's start with breadth. It is still a bit below the prior high while the S&P is well over its prior high. In prior rallies breadth led but not this time. Lagging breadth, if it continues, eventually weighs on the indexes.

The McClellan Summation Index did finally turn up, although you will need a high powered microscope to see it. Let's just note that it is highly unusual for the Summation Index to be so lagging with the S&P at a new all time high since it represents what the majority of stocks are doing.

Then there are the number of stocks making new highs. In mid-March the NYSE saw just over 500 new highs; Thursday it had just shy of 200. That's narrow and not expanding. Nasdaq is not much better. It had over 700 new highs in February, and now it has 132. The only excuse we can give Nasdaq is that it hasn't made a new high yet.

On the sentiment side of things, the American Association of Individual Investors bulls backed off a bit, similar to the Investors Intelligence bulls. My weekend Twitter poll was off the charts bullish with 69% of respondents looking for more upside. That is the highest reading yet.

The results are in!!! Folks are the most bulled up they have been in the (almost) one year I have been doing this poll. You guys missed 70% up (bulls) by a fraction!!!

We've often seen when the spread is so wide the upcoming week is marked by downs and ups, not straight ups. Remember last week we had a wide spread to the upside, but the first two days of the week were down before we rallied again.

The National Association of Active Investment Managers (NAAIM) is the one bullish indicator I have on the sentiment front. They lowered their exposure to 52% this past week. I believe they represent the folks who tend to own growth/tech stocks so it makes some sense they don't love the market here. That probably leaves some room for them to get bullish again this coming week. 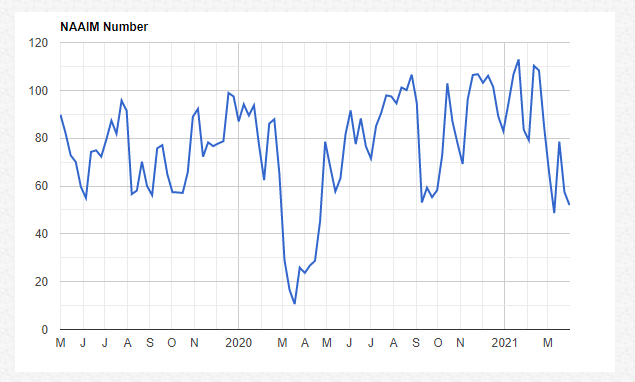 Finally, the Daily Sentiment Index (DSI) for the Volatility Index is at 11. A single digit reading would be bullish for the VIX (bearish for stocks). The DSI for the S&P is at 82. It is possible that by the end of the week we could see the DSI for the VIX in single digits and the S&P's at/near/over 90. If that happens as we get overbought then I'd start looking for us to come back down in the latter part of April.

Get an email alert each time I write an article for Real Money. Click the "+Follow" next to my byline to this article.
TAGS: Investing | Stocks | Technical Analysis | Top Stocks |