Seems incredible. No, I am far too young, but I do remember my father's personal disbelief that 30, and then 40 years had passed. Friday marks the 77th anniversary of the Empire of Japan's attack on U.S. military facilities at Pearl Harbor, dragging the United States into World War ll. Before most Americans even knew what had transpired, Japanese naval and air forces would have also attacked Hong Kong, Guam, Malaya, the Philippines, Wake Island and Midway Island. In aggregate, 2,335 US military personnel were killed that morning, while another 1,143 were wounded. By 1945, more than 425,000 such persons would become casualties in the Pacific theater alone.

In little more than 24 hours, in the city of brotherly love, Army and Navy will take the field of friendly strife for the 119th time. The game will draw very high ratings as tradition demands that these two teams play the final regular season game of the college football season. As many of you watch the game unfold, I only ask you to keep in mind, just how peculiar this event is. A sporting event where more than 8 million will sit (or stand) and watch a handful of college students who are all willing to die for them... play a game. Time passes. The foundation of personal honor is a baton passed from one generation to the next, and so on. Eternal.

Interesting to say the least. On a day that saw intense weakness across the energy, financial, and materials sectors, the five major equity indices all found support at levels that had provided support either in October or November, and in some cases, both. By the way, that death cross that I did expect to occur for the S&P 500 has still not yet come to pass.

The good news? The 50-day simple moving average still stands a rough one point above the 200-day SMA. The bad news? That spot is still 67 points above Thursday night's closing sale. The longer prices remain at these levels, the greater the impact upon the 50-day average, obviously, therefore increasing the possibility that markets do experience that death cross signal that could produce an algorithmic reaction.

Also interesting was just how much the media seemed to cling to the idea that the arrest of Huawei CFO Sebrina Meng had impacted the marketplace, when clearly, the sectors that had been impacted the most by the market's selling pressure indicated that oil pricing, the yield curve and forward looking prospects for growth were the forces behind that selling. For if this pressure had truly come to bear over tension with China, more negativity would have been felt in the tech sector, as well as in retail, two groups that easily outperformed the broader markets, and did all day long. Doesn't really take a lot to figure this stuff out.

First, take a look at the third-quarter data on Unit Labor Costs released by the Census Bureau on Thursday morning. Not the headlines, the supporting data. What do you see? Huge negative revisions to Real Hourly Compensation. Really? Oddly, hardly a soul brought this up anywhere. For both Q3 as well as for Q2 mind you, and the Q2 revisions were a doozy. Certainly does not jive with what the BLS has been telling us, and likely will spoon feed us again on this Friday morning.

Those revisions, by the way, show the same number of hours worked, but that folks worked those hours for a great deal less compensation in terms of hourly wages than previously estimated. Are these numbers poor enough for the BEA to have to reduce their final estimate of 4.2% for Q2 GDP? Perhaps. People obviously brought home considerably less than previously thought.

The FOMC, we can only hope, takes the time to look at this data as closely as this trader does. If they do, and put that together with the broad weakness across housing, autos, factory orders, durable goods orders, core durable goods orders and even consumer level inflation, then as a group they must reconsider the pace of their aggression. On Wednesday, in the Beige Book, four of the twelve districts reported slowing economic growth. The slope of the curve does not flatten to the point of inversion just for the heck of it, gang. Late in the day, the Wall Street Journal reported that perhaps the FOMC might take a wait and see approach going forward, but those rumors were bouncing around on Wall Street for hours prior to anything being published.

Sounds healthy to you? Is slowing the trajectory of this path even enough this late in the game to stave off a late-2019, or early-2020 economic recession? I mean, when you continue to quietly burn $50 billion a month, you are continuing to tighten monetary conditions. Don't even try to sell me this QT working in the background nonsense. This is precisely where the collapse in forward-looking valuations for equities has come from. Was 18.3x too high? I won't argue that, but the path to 15.4x has been fast and furious.

What is clear, and this is important, so Jay Powell and Steven Mnuchin need to pay attention right now... is that we need them them to immediately halt short-term rate hikes, quietly slow quantitative tightening and then send a dovish signal. Then, focus federal borrowing on the long end of the curve in an out-sized way. By the way, this may still hurt equities, I am not defending the marketplace, but the average American gets squashed in a recession. Even if the intention is to normalize rates, and I do in theory agree with that intention, a new focus must be made on repairing the yield curve before regular people get hurt. Yes, this requires finesse, but are you really going to leave Americans in harm's way? You took this job. Now, do it. Duty. Honor. Country... or get out of the way.

The Beauty of Opportunity

I think I like Ulta Beauty (ULTA) . Don't get me wrong. This name will trade at a discount this morning after posting the firm's Q3 results on Thursday evening, and the discount will be greater than what a down opening across the broader marketplace offers. Honestly, the name is still expensive in my opinion, but a couple of items stand out.

Comparable sales rocked. The firm reported the 7.8% growth that they had guided us to. At the retail level, those comp sales printed at 4.4% growth, while the firm's e-commerce business grew at an astounding 43% pace.

Therein lies the story for me. The firm is executing well, and the out-sized growth comes from a place that will allow for eventual margin growth, even if that growth required some increased up-front spending, as the firm had told us in early November. On top of this, I feel that by providing the salon business, the firm builds a mote around its other business lines. The reason the name will trade off this morning is that guidance on revenue for the fourth quarter came in a bit light. 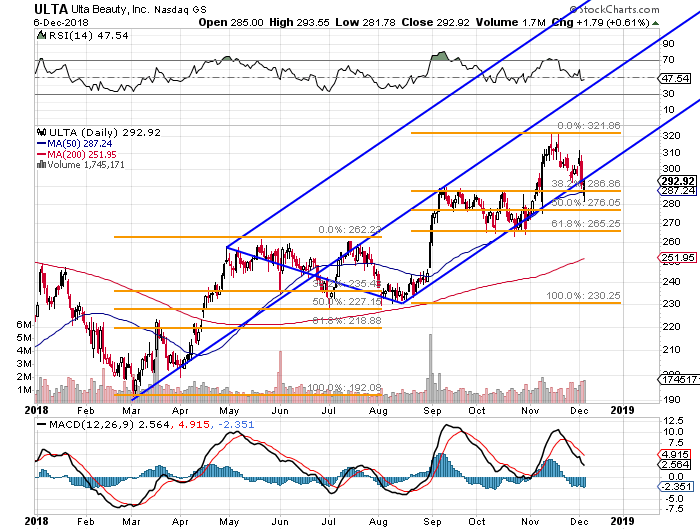 Do I blindly buy the shares Friday morning because they are lower? Of course not. Take a look at the chart. Obviously the Pitchfork, which had been an accurate guide for months, will break on the opening bell. Where does it catch? Our Fibonacci model, a model that this name has obeyed in the past, suggests two spots... $276, and $265. The stock is trading around $278 in the dark hours of early morning/late night.

My intent will be at some point today, to enter at around $276 with about one eighth of what I would consider a full position, and then add one quarter of the full load at $265. If that happens, I still have plenty of dry powder. And if it does not happen, I do not break price. This happens only on my terms. Any partials then become a trade and not an investment. What I do then is price out my hedge, be it the sale of covered calls or discounted puts. We never play high-priced names without manipulating net basis. That will be a game-time decision made based on premiums and expiration dates. Rock on.