For his "Executive Decision" segment of Mad Money Thursday night, Jim Cramer sat down with Michael Weiss, chairman, president and CEO of TG Therapeutics Inc. (TGTX) , the biotech company with shares still up 75% for 2019, despite recent weakness.

Weiss said that developing drugs is a long process, but when you get it right, it's magical. That's why TG takes an unconventional approach to their treatments, opting to develop cures for early-stage Leukemia, Lymphoma and MS. These treatments take a lot of time, he said, but so far they've been encouraged by their progress.

Cramer noted that TGTX is a speculative company, one that still has no revenues, but their story continues to be compelling. Let's see what the charts suggest.

In the daily bar chart of TGTX, below, we can see what looks like a base pattern to me when we look at volume along with the price action. The direction or slope of the 50-day moving average line is positive and the slower-to-react 200-day line is bottoming.

The daily On-Balance-Volume (OBV) line has bottomed out with price and has been rising (bullish) since the beginning of the year.

The trend-following Moving Average Convergence Divergence (MACD) oscillator turned up above the zero line in early March and looks poised to do that again for a fresh buy signal.

In the weekly chart of TGTX, below, the picture is not as bullish. Here prices are in a broad sideways pattern with the 40-week moving average line pointed down.

The weekly On-Balance-Volume (OBV) line has been in a decline since early 2017 suggesting a long period of selling and liquidation. The weekly MACD oscillator is poised to cross to the downside for a take profits sell signal and probably an outright sell signal.

In this Point and Figure chart of TGTX, below, an upside price target of $18.25 is being indicated but we can see a considerable band of chart resistance above the market. 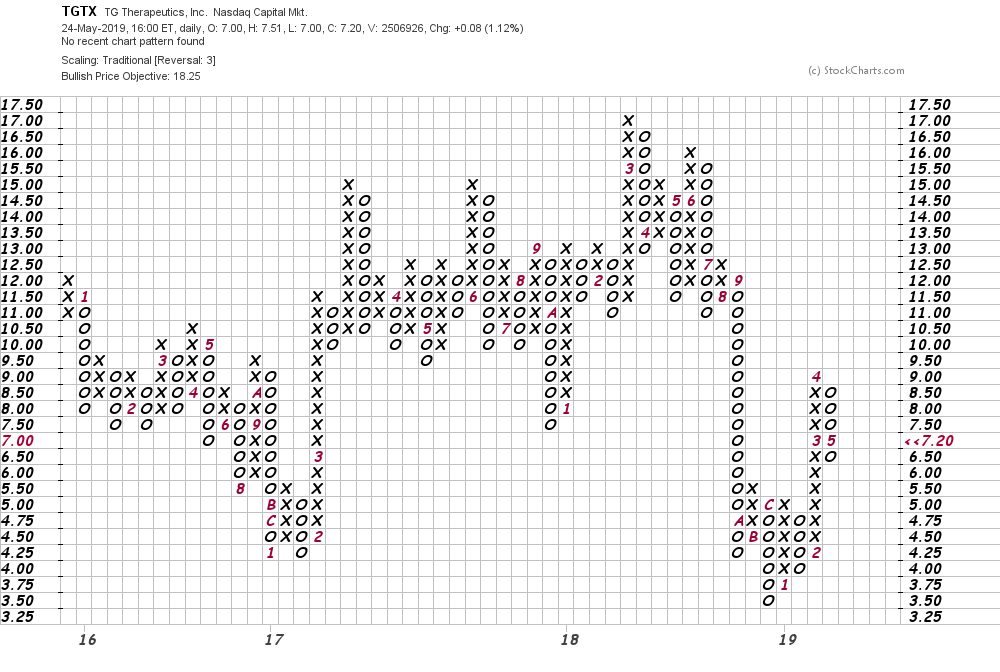 Bottom-line strategy: The three charts of TGTX, above, are mixed -- they show some upside potential but not all or even most of the indicators are positive. Investors might put TGTX on their shopping list for now but defer pulling the trigger until the indicators improve.

Get an email alert each time I write an article for Real Money. Click the "+Follow" next to my byline to this article.
TAGS: Investing | Stocks | Technical Analysis | Pharmaceuticals | Mad Money | Executive Interview

Jim Cramer: In Retail, Darwin Reigns Until We Shut Down Covid-19

The main takeaway as always is that the real casualties are those enterprises that aren't public.

In the vast middle, there is a mishmash of action and rotation.

Check This Out: A Great Online-Only Co., Attractive Valuation and Good Price

CBOE looks like it has it all -- here's how to play it.