After the kind of rally we've had, two red days for the S&P seems like no big deal. But it brings about a test for Thursday. You see, the S&P has not had a third consecutive red day since late February. Think about that, even in the March decline we never made it to three straight down days.

Do you recall back in the March rout, when we couldn't get back-to-back up days? But once we got one, it was the beginning of the change in trend. I do not think that just having one more down day changes the trend, but what it does is change the pattern, and I do think changing the pattern is part of the equation we cannot dismiss. That makes Thursday a test of sorts for the market.

Breadth has been weak the last two days and many stocks have given back the entire move up from last Thursday's close. By that I mean we gapped up on Friday and as of Wednesday's close, many of those stocks have filled those gaps up from Friday. You can see it most readily in the chart of the small cap fund (IWM) where the gap up last Friday had follow-through Monday, but the last two trading days have given it all back. The question is whether or not another rally brings out trapped sellers.

This is similar to the discussion we had regarding American Airlines (AAL)  Tuesday, where we want to see if the subsequent rally makes a lower high. So we turn to breadth, which hasn't been terrific the last two days; I would call it in line with the declines.

So far, the two days of weak breadth has not been enough to halt the rise in the McClellan Summation Index. Remember, to see deterioration underneath we need to see this indicator stop going up and turn down with some persistence. In mid-May, it faltered, flat-lined and then resumed the upward move. Deterioration is what turns a correction into something more severe. I said the seeds are planted, but it's a matter of whether the seeds can take hold and grow. The jury is still out.

On the sentiment front, we have the Investor's Intelligence bulls now at 57%, the highest reading since February. Over 55% and I consider it a yellow flag. Over 60% and it has gone too far and gotten extreme. The put/call ratio is already extreme as you know. The Daily Sentiment Index for Nasdaq at 94 is extreme, as well. So is the Citi Panic/Euphoria Model. 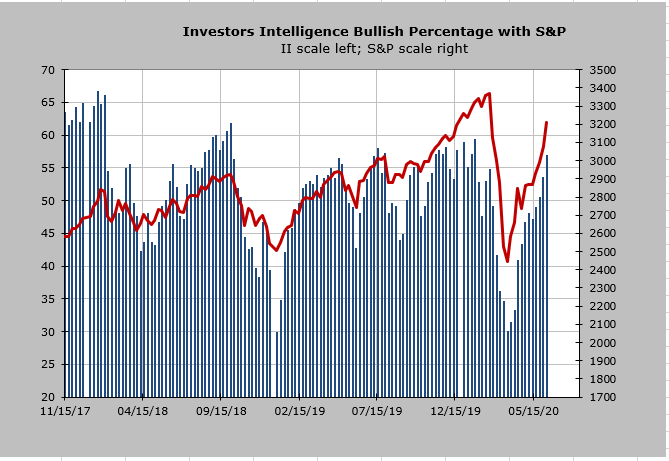 I want to make a final comment about Nasdaq, which keeps going up. Yet for the second day in a row Nasdaq's breadth and net volume were negative with the index higher. It's a minor divergence now and the Summation Index is still rising, but clearly the tech stocks are no longer enjoying enough volume on the upside to offset whatever selling we're seeing in the other names. And that too is a change.