Monday seemed like it was all about Tesla (TSLA) , since its rally made up about half of the S&P's gain. And it was the chatter of the day. That means no one even bothered to notice that the Russell 2000 closed over 2,300 for the first time since June.

Breadth was good on the New York Stock Exchange, which as you know by now, is often unusual when one or several of the mega-cap tech stocks captures the spotlight. In fact, look at the chart of breadth with the S&P: keeping pace. Notice how last summer breadth was not keeping pace with the S&P, since the S&P kept making new highs and breadth couldn't manage to even clear the June high. That is not the case now.

One of my concerns has been that the McClellan Summation Index, which has now made a higher high (than August and September) will turn out to be like the June high, where it made a higher high than March and April and peaked anyway. But I looked back and at the June high, it would take a net differential of only a net negative of 600 advancers minus decliners on the NYSE to turn it back down, which is hardly any sort of cushion with a market at new highs. That is now a net negative 2,100. That's a much better cushion. By that, I mean it would allow for a few down days without rolling over the indicator.

Even Nasdaq's new highs increased. I have been begging for the number of new highs to get over 200 and so they have. Nasdaq came in at 255, the most since June. The NYSE is at 212 new highs and I would like that to be better, since it's been hovering here for weeks now. But it is over 200 and not contracting. 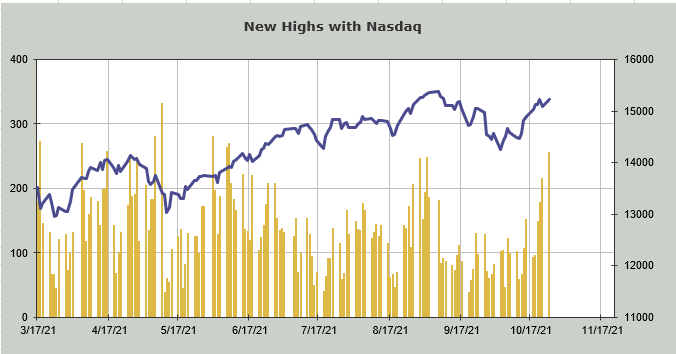 I would note that the transports did tag the May high of (almost) 16,000, with eight-straight days of green under their belt. With the old high here, they are in need of a rest stop. Even if they went on to higher highs in the next few, days I would envision a pullback shortly thereafter.

Sentiment is running a bit hot, though. The put/call ratio was low, not extreme but low at .72. The 10-day moving average is not too low yet but it is now at .80 down from .98 two weeks ago. So you can see that shift.

The Daily Sentiment Index (DSI) for the S&P is at 87. Nasdaq is at 83. And the Volatility Index is at 12. While I do not think too much bullish sentiment is bearish unless it is accompanied by crummy breadth I do think that if the Daily Sentiment Index gets over 90 for the indexes or to single digits or both for the VIX it is a reason for us to see a pullback.

For now I still think we are more apt to chop about and digest.