The e-mail was sent from Tesla (TSLA) CEO Elon Musk to employees stating that the company "had a shot" at delivering 100,000 vehicles in the third quarter. The fact that Musk is pushing employees to reach his goals in nothing new. In fact, investors not only look forward to these events, they actually try to time trades around them.

This particular message pulled the stock out of a bit of a tailspin that saw the shares sell off just two days earlier as it became public that the same Elon Musk was urging investors to approve Tesla's 2016 deal to acquire Solar City at a hefty premium. Shareholders have accused Tesla of improperly valuing ($2.6 billion) Solar City at that time. The stock, as always, is primed for motion, one way or the other.

Why does this come up today?

Today, Monday, is the last day of the quarter. That production number when announced, and it can be any day now, even today will move the shares, and then there are earnings.

Tesla is set to report third-quarter financial performance after the closing bell on Wednesday, Oct. 23. Expectations for earnings are all over the place, running from a high in positive numbers to a loss of greater than $3 per share. The core seems to be in between -$0.40 and -$1.40 on revenue in between $6.25 billion and $6.65 billion. The mere fact that the folks who get paid to analyze the stock have such an array of opinion does give pause to at least this investor.

Gone, I think, are the days, when an investor can with confidence take one side or the other in Tesla for anything more than a trade. As of the most recent quarter reported, cash flows had gone positive, and while gross profit margin has ebbed, EBITDA margin has greatly improved -- and that was a quarter where performance significantly disappointed the analyst community. Oh, and 29% of the float is still held in short positions, which is actually supportive. 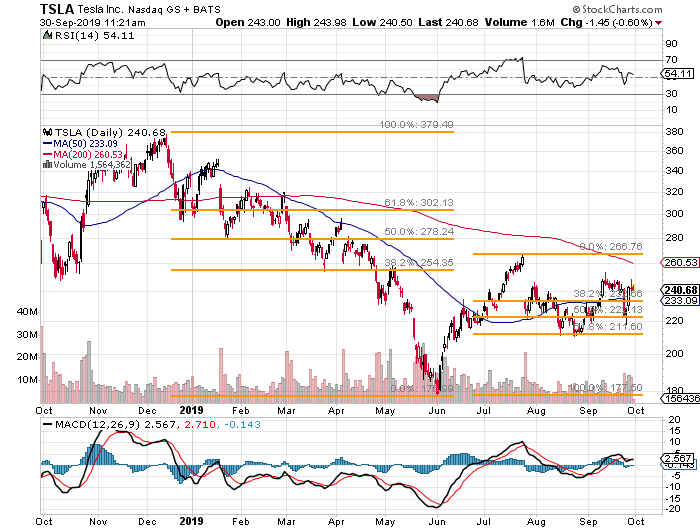 What I notice -- other than the stock retaking the 50-day simple moving average -- is the obedience to the chart's own Fibonacci levels. The rebound off of the June lows stalled at just above a 38.2% retracement, as the selloff that came after that bounce stalled found support at 61.8% of late July selloff.

Investors should note that the 200-day SMA of $260, and a full retracement to the July highs stand within a rough $6 of one another and would provide algorithmic traffic that could cap any numbers based move higher in that neighborhood.

Not being one of Tesla's true believers, I would probably be more likely to make a somewhat hedged directional play through the options market than I would be to take an equity position. An example of this would be an Oct. 25 $240 / $260 bull call spread. At current prices, a one contract spread (+1 $240 call, -1 $260 call), would run the investor a rough $8 net.

In other words, the investor would be risking $800 to try to win back $2,000 in less than a month's time. For someone bearish on the stock, a bear put spread would work in the same way.

Get an email alert each time I write an article for Real Money. Click the "+Follow" next to my byline to this article.
TAGS: Earnings | Investing | Markets | Stocks | Trading | U.S. Equity | Stock of the Day